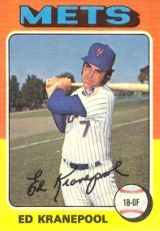 Chuck Carr, Daryl Boston, Gary Bennett, Jason Phillips, Juan (ugh) Samuel, and several others wore number 7 for the Mets — not quite the level of player who wore the same digit in the Bronx.

But then, there was also Todd Pratt — he of the clutch pinch-hit homerun. And Hubie Brooks, who for a short time in the early 1980s was the Mets’ closest argument for the All-Star team.

However, there’s only one Met deserving of the honor today: Ed Kranepool — who switched to 7 from 21 when Warren Spahn joined the club.

Expectations were high when Kranepool was signed out of James Monroe HS as a 17-year-old in 1962 — after all, he played the same position at the same school as the great Hank Greenberg. Also, like Greenberg, Kranepool was 6’3″ and 210 pounds — a strapping young lad. Unfortunately, that’s were the comparisons end, as Eddie K’s career .261 average and 118 HRs in 18 seasons will attest.

While Kranepool never fulfilled the stardom that was hoped for him, he did in many ways embody what it was to be a Met. He was average or below-average in every facet of the game, and even as a teenager resembled the over-the-hill veterans that studded the Mets’ roster in the early 1960s. During his rookie season, manager Casey Stengel once quipped, “He’s only seventeen and he runs like thirty.” As a 19-year-old, his play prompted one Polo Grounds fan to hang the banner, “Is Ed Kranepool Over the Hill?”.

“Steady Eddie” was the Mets’ starting first baseman from 1964-1969 by default — somehow the Mets couldn’t come up with any better first sackers during that time period. That is, until Donn Clendenon showed up. The slugging first baseman picked up from the Montreal Expos took over Ed’s duties and helped hit the Mets into their first Championship. However, Kranepool did play one game of the 1969 World Series, and hit a solo homer.

Kranepool’s batting dropped below the Mendoza line in 1970 (before anyone knew who Mario Mendoza was) and he was sent to AAA Tidewater. At age 24, Ed Kranepool was considering retirement.

However, he eventually resurfaced, and rebounded with the best season of his career in 1971 — batting .280 with 14 HRs and 58 RBI and leading NL first basemen with a .998 fielding percentage. From there on, he quickly evolved into a part-time player and then a pinch-hitter — a role in which he flourished. Besides extending his career to 1979, Kranepool batted .396 as a pinch-hitter from 1974-1978, including a .486 mark in 1974, finally endearing himself to fans. If nothing else, “Steady Eddie” had longevity — 18 seasons and 1853 games as a New York Met.