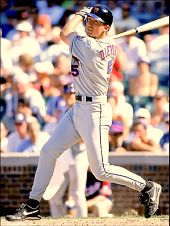 There have been a multitude of Mets who have worn the number five on their back. Steve Henderson, Hobie Landrith, Joe Foy, Sandy Alomar Sr., Ed Charles, Brook Fordyce, Mark Johnson, and Tsuyoshi Shinjo were just a handful (I didn’t say they were good, only that they were many). But before David Wright, only one #5 stands out:

The Mets stole Olerud from the Blue Jays for a song — journeyman pitcher Robert Person. At the time, it seemed an unreal deal, and looking back, it’s even more of a head-scratcher. But the Blue Jays had to clear some salary and the first base position to make room for a young slugger named Carlos Delgado, so Olerud made his way to Flushing.

Olerud had come off a poor season, batting only .274 — mostly because his coaches in Toronto were trying to get him to pull the ball more and hit more homeruns. Former manager Cito Gaston questioned his toughness and his love for the game, and told newspapers that the 27-year-old might retire after the ’97 season — and that he might not have the proper personality to play in New York.

Johnny O not only handled the tough New York crowd and pressure of playing in the media capital of the world — he flourished, and became a fan favorite to boot. Olerud had so many clutch hits in a Mets uniform, it got to the point where you expected him to come through with the impossible base hit in the bottom of the ninth to win the game. Platooned in Toronto, Olerud vowed that he’d make it difficult for new manager Bobby Valentine to take him out of the lineup — and delivered on his promise. Allowed to hit “his way” — often to the opposite field — Olerud hit 22 HRs, drove in 102, and batted .294 in his first year as a Met. But that was only the beginning. He followed it up with a .354 season in 1998, finishing second for the batting title. In 1999, his average dropped to a shade under .300 but nearly every one of his hits counted as he drove in another 96 runs, while playing in all 162 games. He also walked 125 times that season and scored 107 runs, setting the table for Mike Piazza and Robin Ventura.

In addition to his bat, Olerud did it with the glove, playing the right corner so well that some questioned whether Keith Hernandez was the best-fielding first baseman in Flushing history. He was part of the Sports Illustrated cover article — pictured with Edgardo Alfonzo, Rey Ordonez, and Ventura — that proclaimed them “The Best Infield Ever”.

Unfortunately, it was easy come, easy go, as Olerud took advantage of free agency to go West to play for the Seattle Mariners in his home state of Washington. Sadly, he did return to New York, but as a Yankee, in 2005. However, he’ll forever be remembered in New York as a Met — for three years one of the classiest and most clutch players ever to wear the orange and blue.

Back Mets Game 155: Win Over Marlins
Next Series Preview: Mets vs. Nationals