Awake from a Long Slumber 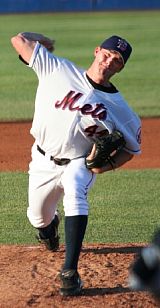 Finally, many Mets fans — including several MetsToday diehards — will see the MLB debut of Philip Humber as a starting pitcher, on Wednesday against the Nationals.

Yes, we know he made his MLB debut in a five-minute stint at the end of last September, and we know he’s pitched three garbage innings this year. But Wednesday will mark his true baptism — by fire, no less — throwing his first meaningful innings as a New York Met. By then, with some help from (ironically) the Braves, the Mets could have first place wrapped up. However, it could also turn out to be the most vital game of the season — because, if the Mets lose on Monday and Tuesday, and the Phillies beat the Braves on Tuesday, only one-half game will separate the Mets from the Phils. In other words, a loss on Wednesday could potentially put the Mets in a first-place tie, less than two weeks after being seven games ahead. Talk about pressure for your first MLB start.

But it didn’t have to happen this way.

Philip Humber spent the entire season in AAA, pitching for the New Orleans Zephyrs. His numbers were only so-so on paper, but fairly promising considering that the PCL is a hitter’s league. And he finished with a flourish, taking a no-hitter into the ninth in his second-to-last start on August 22nd. He won his last game on August 27th, and was briskly promoted to the big club on September 1, leaving his Zephyrs teammates behind to begin the AAA postseason.

Strangely, though, Humber was forgotten in Willie Randolph’s bullpen, and was never considered for spot starting. If he wasn’t going to be given a decent look by the Mets, then why didn’t he stay in New Orleans to help the Zephyrs in their postseason?

The explanation is likely similar to the reason why Humber was not brought up for a spot start earlier in the season, when the Mets were giving the ball to Jason Vargas, Brian Lawrence, Dave Williams, and others. First of all, 2007 is Humber’s first full season after Tommy John surgery, so the Mets were going to make sure he didn’t do anything that might cause a relapse or a step backward. In spring training, with little chance of making the 25-man roster, Humber was overthrowing, in an attempt to catch the attention of Mets management. Well, he caught their attention, all right — and as a result they made the decision to keep him at AAA all year, lest he reinjure himself. No doubt, someone in Port St. Lucie was part of the Mets organization the day Tim Leary blew his arm out overthrowing in his MLB debut, or remembered similar issues with Jason Isringhausen, Grant Roberts, Bill Pulsipher, etc. The Mets have invested millions in Humber’s right arm, and nursed it back to health, and were not taking any chances in him reinjuring it.

Secondly, the Mets did not want to make the same mistake with Humber they did with Mike Pelfrey in 2006. Pelfrey was rushed to the big leagues, and overmatched when he arrived. As a result, he had a less-than-stellar rookie season, and after losing his confidence early in 2007, looked to take a step backward. Because they see a bright future for Humber, they decided to keep him back to continue honing and polishing his stuff, so that when he’d face MLB hitters, he’d be better prepared than Pelfrey was in his debut.

Indeed, the Mets did a fine job of protecting Humber for five months and three weeks of their regular season. When the Zephyrs made the playoffs, they promoted him, perhaps, to keep him from throwing too many pitches in his first full year back. By the way he’s been used, it’s clear the promotion was similar to last year’s September callup: a reward for the hard work he’d done all year. Get a taste of big league life, to motivate him to make the team next spring. To have the opportunity to rub elbows with, and perhaps learn from, legends such as Pedro Martinez and Tom Glavine. And maybe once or twice before the end of the season, he’d get the chance to throw pitches to big-league batters, in a big-league park, in front of a big-league crowd.

Well, the plans have been amended.

Humber will indeed pitch in front of a big-league crowd — likely the sellout variety — at Shea Stadium. If the Mets are lucky, it won’t be as big a game as is possible. For example, if the Mets win the first two games, the magic number will be down to 3 (at minimum). If the Phillies also lose, it could be down to two. Not a lot of pressure for the big strapping Texan.

However, if the worst-case scenario is realized — if the Mets lose the first two games and the Phillies win one — then Humber’s start will be the biggest game of the year for the New York Mets. The Phillies would then be a half game out of first, and a loss by the Mets would either create a tie for first or drop them into second place for the first time since May, with three games left to play. I’m feeling a bit of tension simply typing out this possibility, so we can only imagine how a quiet youngster with four innings of MLB experience might react.

The shame of this falls on Willie Randolph, who for unknown reasons thought it best to start Brian Lawrence — rather than Humber — last Monday against the Nationals. Prior to the start of that game, the Mets had been swept by the Phillies at home, but were still 3 1/2 games ahead. In other words, no time to panic. If Humber had the jitters, so what? The Mets had a decent cushion, and didn’t it make sense to let the youngster get his feet wet then, rather than now? This shouldn’t have been suprising, of course — the decision was completely in line with Willie’s premature paranoia, the same fear that forces him to bring in Aaron Heilman, rather than a fresh arm, on back-to-back days when the Mets are leading by three runs. It’s the same fear that makes Willie walk out to the mound to remove Pedro Feliciano after three pitches in the ninth inning (again, with a three-run lead).

That same fear in Willie instigated the illogical explanation of starting Lawrence last week — because Lawrence was “on schedule” and Humber was “just a baby”. Randolph’s exact words:

“You don’t take a young guy like that who’s never done it and force-feed him,” Randolph said.

Willie! You were up by more than three games! If THAT was a “force-feed” situation then what the heck is this Wednesday?

Exacerbating the situation is the fact that Randolph had been reluctant to give Humber more than a scant few garbage innings, despite having several opportunities. The kid has pitched three innings since September 1st. THREE. Two innings against Cincinnati in a 7-0 blowout on September 5th, and one lousy inning in a similar situation on September 11th. The opportunities where there, however. He could have been used against Philadelphia, after the Mota meltdown, for example, or against the Nats after Lawrence faltered the next day. He could have been given an inning in the game the Mets blew out the Astros 11-3 — but we supposed he couldn’t be trusted to hold an eight-run lead for an inning or two. In any case, Humber hasn’t thrown enough game innings to be sharp — and don’t think his three-inning “simulated game” in Port St. Lucie counts. EVERYTHING changes when you walk onto the mound in a REAL game. It’s silly to believe that you can use tired A-ball players in a vacant park to prepare Humber to face big leaguers in front of 55,000 New York fans. It could have been a little easier had he done it before — say, last Monday.

Hopefully, the Mets will take the first two against the Nats and thereby reduce the tension for Humber’s start. Maybe, it won’t matter — maybe we’ll find out Humber has the stomach to handle the biggest game of the season.

Luckily, his manager won’t be adding any pressure to the situation.

Great, Philip — just go out there and throw a gem (and nothing less).

Back More Games By Milton Bradley
Next Mets Game 156: Loss to Nationals