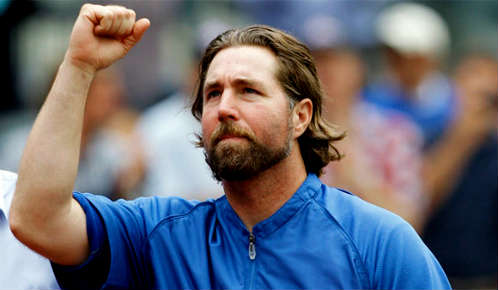 There’s already been plenty of discussion about the relative merits of starting pitchers and relievers for Cy Young consideration. I am in the camp that believes that (a) relievers absolutely should be considered and (b) they should need to truly blow away the starting pitching competition in order to win.

The last reliever to win the Cy Young was Eric Gagne in 2003, and I believe (PEDs aside) that he deserved it. It wasn’t just the .133 batting average or .375 OPS allowed, or the K/9 rate near 15 (though those helped). It was the fact that he went the extra mile to get all the late outs his team really had to have. He was always there, with 77 appearances, including 4 days in a row 3 times, and 3 days in a row an additional 4 times. He wasn’t allergic to the 8th inning, saving 8 games he entered in the 8th. There were a few bumps in the road, but when it came to his number one responsibility, saving games, he was a perfect 55 for 55.

Despite all that, if the voters had given the award to Jason Schmidt or Mark Prior, I would have simply shrugged. I would have disagreed, but I wouldn’t have been furious, or called the writers idiots or biased. Why? Because being great for 220 innings is harder, and more valuable, than being extra super great for 82 innings.

(“Harder?” Remember Gagne’s tenure as a starting pitcher? Not pretty. Likewise Joe Nathan, Mariano Rivera, and pretty much every closer who ever started besides Eck and Smoltz. “More valuable?” Does anyone doubt that Halladay, Hamels and Lee would all be fantastic closers? Does anyone not think their teams would have been idiots to use them that way?)

This brings me, at last, to Craig Kimbrel and R.A. Dickey. Kimbrel is striking batters out at an epic rate, and challenging Gagne’s batting average and OPS records. He is the closest thing around to unhittable. And yet, he’s no 2003 Eric Gagne:

• He’s not perfect in save chances – in fact, he’s only fourth in the majors in save percentage this year.
• He’s not getting every important late out all by himself. Thanks to a smart/paranoid Braves management, he’s had perhaps the cushiest usage in the game, pitching in 60 games, 59 of which saw him begin an inning and record exactly three outs. He’s pitched 3 straight days twice all season, and never 4 straight.

Through September 28th, here’s Kimbrel’s line. R.A. Dickey had a stretch of starts earlier this year that looked rather similar.

For 8 starts, Dickey was almost as effective as Kimbrel (fewer Ks and worse ERA, better WHIP and K/BB rate).

And then on top of that, Dickey has made an additional contribution (also through September 28th):

That’s a 3.18 ERA, a shade better than Cliff Lee for 10th in the National League (in enough innings to qualify among the league leaders, no less.)

So, what’s the difference between Kimbrel and Dickey? It’s basically Tim Hudson:

But with, you know, 10 fewer runs and 50 more strikeouts. I could just as easily have picked Wade Miley or Ryan Vogelsong, but I think the esteemed Mr. Hudson makes the point more strikingly.

Even subtracting Kimbrel’s exact line from Dickey’s, what you get is Ross Detwiler, who, while the least famous member of the Nats’ rotation, has more than held his own.

(NOTE: the stats in this post were correct as of Friday, September 28. – Ed.)