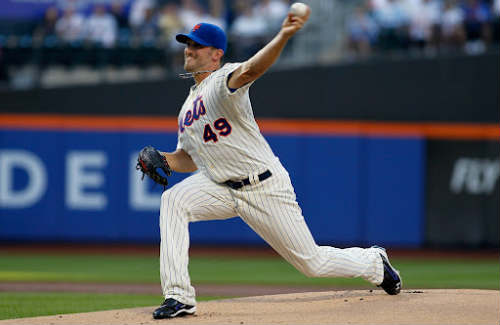 Would you consider 2012 to be a “breakout season” for Jonathon Niese?

Last November, my evaluation of Jonathon Niese included two major concerns: would he ever have enough stamina to sustain a full 162-game season, and would he ever give up his sometimes detrimental love affair with the cutter.

If Niese can stay strong and figure out a way to keep his arm angle at that high three-quarter release point, I’m confident he can become a solid #3 starter who gives a team 200 innings and 12-14 wins. If I was advising Niese, I’d recommend he ditch the cutter and replace it with a change-up, and work on staying “on top” with a consistent release point for all pitches. But, the change-up can take much longer to perfect, and an inconsistent cutter can be over-valued for its ability to get swings and misses when it’s working. Short-term results are always valued over long-term development at the MLB level, so I’m betting that Niese stays with the cutter and continues to be a good, but not great, #4 starter who eats innings but allows too many baserunners to take his game to the next level, rather than a solid #3 starter who shows flashes of becoming a #2.

As it turned out, Niese stayed with the cutter — in fact, he increased his use of it — and was a solid #3 starter who showed flashes of becoming a #2.

So there, Joe Janish.

However, I’m still not sold on over-reliance on the cutter being the best thing for Niese long-term. Call me stubborn, or a rock head, but I’m sticking with my theory for at least one more year. Hey, if I wait long enough, eventually I’ll be right — right?

In all seriousness, let’s look at the numbers. Niese made 30 starts, tossed 190 innings, and went 13-9 with a 3.40 ERA — a full run below the 4.40 ERA posted in 2011. He likely would’ve had closer to 15 or 16 wins had the Mets given him more offensive support and/or better relief. His WHIP was a very impressive 1.17, and he finished the year with four solid starts in September. In fact, he seemed to get stronger as the summer wore on; his ERA dropped from 3.73 in the first half to 3.01 in the second, and his heaviest workload came in August, when he logged 41 innings. Further, he completed 6 innings or more in every single start from June 3rd to the end of the season, and increased his average per-start pitch count from 95 to 101. Niese did all this while throwing 10.6% more cutters compared to 2011. So why am I still not convinced that Niese will follow in the footsteps of Andy Pettitte?

For one, Niese still had trouble throwing both a good cutter and knee-buckling curveball in the same game; it happened maybe four or five times out of his 30 starts. I understand that it’s rare for a pitcher to have all of his pitches working at the same time, but this particular instance, it has to do with arm angle. Niese has a tendency to drop his arm slot when throwing an abundance of cutters, which results in the flattening of his fastball and either hanging curveballs (thrown from a low slot) or telegraphed curveballs (because the arm angle raises). More importantly, that lower arm angle puts more strain on the shoulder and elbow. Added strain plus bigger workload equals higher chance of injury.

There’s something else, too, about Niese’s 2012 — he might have been lucky. Looking at more finely grained numbers and some advanced stats, it appears that Niese’s sparkling ERA was an anomaly. Compared to 2011, his ground-ball rate lowered a bit, while his fly ball and line drive rates went up a tick; batters also swung and missed slightly less often. Usually, more line drives mean more hits, and sometimes, more fly balls result in more homeruns — but neither were the case.

Perhaps more to the point are a few advanced stats that I don’t pretend to fully understand — nor completely trust — but might help explain things a bit more. First, batters had a .276 BABIP against Niese, which is about 25 points below league average. That could be because Niese was good at preventing hitters from getting good wood on the ball, and/or good at getting hitters to hit the ball at fielders — it did seem to me that Mets infielders were often perfectly positioned, and I assumed it was due to a combination of fantastic scouting and pitch location. But it could also be due to luck; I’m not really sure. (BTW, batters had a .344 BABIP vs. Niese in 2011.) Then there is Niese’s xFIP, which increased from 3.28 in ’11 to 3.64 in ’12. Generally, you want to see that number decrease, but I’m not sure whether .36 is a significant change (help from one of the statheads, please?). Niese’s tERA and SIERA numbers also increased a bit, but again, not sure if the increase was significant; maybe the point is that those numbers weren’t much different from 2011 — nor 2010, for that matter. (For those unaware, xFIP, tERA, and SIERA are all stats that attempt to measure a pitcher’s effectiveness independent of defense.) Maybe these stats tell us that Niese’s 2012 wasn’t as much of a “breakout” as it appears from the “conventional” numbers; perhaps Niese is the same pitcher he always was, but was unlucky prior to 2012. If you are into advanced metrics, please weigh in on this with your thoughts in the comments.

Stats or no stats, I was pleased with Niese’s progress in terms of stamina and game-to-game consistency in 2012, and expect him to be a similar pitcher in 2013. I do hate his reliance on the cutter, and will go to the grave believing he’d be a better (and healthier) pitcher if he focused more on his overhand curveball and fastball, but I love his competitiveness and know that alone makes him at worst a solid #3 on a championship team. His team-friendly contract, age, and track record make him a lucrative trade chip, so I won’t be surprised if the Mets include him in a blockbuster deal that nets multiple prospects. However, that’s not necessarily what I want to happen — I’d rather have the opportunity to watch him pitch once every five days for the Mets.