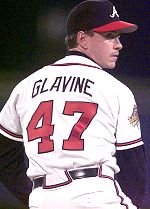 Well, at least we now know why Tom Glavine wasn’t nearly as broken up as the rest of us after singlehandedly eliminating the Mets’ last chance at the postseason.

Tommy wasn’t “devastated” because, it appears, he can’t get out of town fast enough. Most likely, it didn’t help that some of his teammates seemed indifferent about winning and losing back in June (that one postgame interview with Tommy, when he pitched well but suffered a tough loss, and in the background players were joking and laughing, couldn’t have sat well).

From an article entitled “Glavine Most Likely Done with Mets” on SI.com :

â€œI know if I decide to become a full-fledged free agent, Iâ€™d have a lot of interest from a lot of teamsâ€¦Atlanta is home. The hardest thing for me in New York is playing and being away from home. Iâ€™ve played in New York for five years now. If you break it down, Iâ€™ve been away from my home for four years now. Iâ€™m at the point where my wife and kids are making sacrifices for me.â€

“I have five days at the end of our season to accept or decline [the option],” Glavine said from his Alpharetta, Ga., home. “Most likely, I’ll decline it.”

Most likely, Glavine will pass on the guaranteed $13M player option he earned by pitching 160 innings this season, and take the same (or less) money from the Braves. Let’s face it, he wanted to go back to Atlanta last year, but the Braves were too stingy to pony up the dough (ironically, they tried to dump Tim Hudson to make it work). This year, though, it’s already been made official that Andruw Jones will be off the books, so there’s suddenly a windfall of money. So Glavine can go back to his “home” (didn’t he grow up in New England?) and play golf with his best buddy John Smoltz next year.

Personally, although I loved watching Glavine, in my mind he’s worn out his welcome — and it began with his indecision of last November. His two postseason gems of 2006 have been erased by his final three abysmal starts of 2007 — most notably, of course, the torturous Game 162.

On the one hand, it’s good that it appears Glavine will be making his decision sooner rather than later. His hemming and hawing last November, waiting for the Braves to offer him a contract, was more than annoying, and it froze the Mets’ offseason dealing for the weeks leading up to the winter meetings. This time around, the Mets will know of his plans immediately — purportedly by Friday — and can then move on with their revamp of the pitching staff.

On the other hand, Glavine will join a rotation that already includes Tim Hudson and John Smoltz. If the Braves had Glavine this year, the Mets might have finished in THIRD place, not second. Whether Glavine can continue the magic that got him through the first 31 starts of 2007, or if his last three are more indicative of his 2008, remains to be seen. Even at his worst, you’d have to think that Glavine will make another 30-33 starts, and find a way to win at least ten games.

Also annoying will be the outpouring of emotion when Glavine makes his return to the Braves — we’ll have to hear all about the lovefest from the Atlanta media for weeks on end, I’m sure. Hopefully we won’t have to read too many quotes like “I never wanted to leave” and “I never felt comfortable in New York” and “Atlanta fans are the best”.

Assuming Tom Glavine does indeed return to the Braves for a final season, I offer him one piece of advice: leave your family in Atlanta when you make your first trip to New York. It’s not going to be pretty.

Back What Went Wrong: Attitude
Next Lastings’ Disappointment