How A-Rod Can Affect the Mets 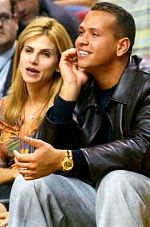 It’s premature to start thinking about the offseason intentions of Alex Rodriguez — from what I understand, the postseason is still happening (when the Mets stop playing, I stop watching). However, it’s fun to dream up “what ifs”.

Presuming A-Rod opts out of his Yankee contract and goes on the free market, there will be a handful of bidders who can afford him. My non-educated guesses:

There are probably other teams out there with more cash than we know (San Francisco Giants?), but let’s leave the list as is. What, no Mets? Then why are we wasting our time thinking about A-Rod?

Here’s my thought: a team may need to shed a big salary in order to take on the $35M+ commitment that Alex Rodriguez (and Scott Boras) will demand. There aren’t many other teams with deep enough pockets to take on a big salary, who won’t already be in on the bidding. The Mets likely won’t be bidding, but do have bucks — particularly if Tom Glavine, Paul LoDuca, and several other free-agents come off the books.

That said, some possible scenarios:

O’s owner Peter Angelos loves to throw money at big-name free agents, and A-Rod is the cream of all crops. But Miguel Tejada is already at shortstop, already making a bundle, and has been something of a malcontent lately. IF Tejada were willing to move to second base, then either Angelos could send him (and the $25M owed on his contract) to the Mets for pitching and outfield prospects. If Tejada is willing to move to 2B and Angelos decides to keep him, then the O’s need to move Brian Roberts. The Orioles also have a logjam at catcher, with Ramon Hernandez — a guy the Mets coveted two years ago — and up-and-coming J.R. House. Who knows, if Angelos is willing to go on one of his wild, illogical spending sprees, he might be willing to take on the rest of Carlos Delgado’s contract as well. A-Rod or no A-Rod, the Mets and Orioles could be trade partners this winter.

The Bosox originally traded for A-Rod — sending Manny away — until the MLBPA stepped in. My thinking is that they’ll pounce on a second chance to steal Rodriguez away from the Evil Empire — at any cost. They could keep him at third base and let MVP candidate Mike Lowell walk, or keep Lowell and install A-Rod at shortstop — then deal Julio Lugo to the Mets, where he can take over at second base. However, Theo Epstein might have to shed some salary to make room for Rodriguez on the payroll — and send Manny Ramirez Sheaward as well. Manny has one year at $20M left on his deal, plus team options for ’09 and ’10.

It’s a longshot, but the logistics make sense for all involved. The Red Sox have wanted to rid themselves of Manny for years, but couldn’t replace his bat — they can with A-Rod. Having A-Rod means they can justify sending away Manny, which clears a big chunk of payroll in ’08 and removes them from the painful decision of the option years. In addition, one would assume they’d get a up-and-coming outfielder in return — Lastings Milledge? — as well as another useful part.

From the Mets point of view, they get one of the best hitters in MLB as a one-year rental with the option of keeping him around if he behaves (and performs). It would be a gamble, for sure — on many fronts — but Omar Minaya likes to make big splashes. If the Mets can get a second baseman of Lugo’s caliber in the deal as well, even better. There’s no question the Mets are playing for a World Championship in ’08, and pulling the trigger on a Manny deal would be a serious statement toward that goal.

I don’t see a deal with these guys — nothing matches up. Though, if they wanted to “dump” Vladimir Guerrero and his contract on the Mets, I’m sure Omar would listen.

Ain’t gonna happen. With Clemens and Abreu off the books, plus Giambi, Pettitte, Pavano, and Mussina (among others) coming off after ’08, the Yanks have a windfall of cash — enough to afford TWO A-Rods.

A real longshot, but you’d have to think that the Cubs would need to dump salary to fit A-Rod into the plans. Would they deal Alfonso Soriano, so early in his contract? Derrek Lee has almost $40M left on his deal, which goes through 2010 — though there is a no-trade clause. Probably nothing brewing here.

Again, this is all very premature … for all we know, the Yankees will re-negotiate an extension on A-Rod’s contract before he tests the waters. This was more for fun, and to spark some debate. What do you think? Are there other teams that I may have missed, that could match up with the Mets in a similar scenario? Do you think the Mets will be affected at all by what Rodriguez decides? Will the METS be a bidder? Post your thoughts.