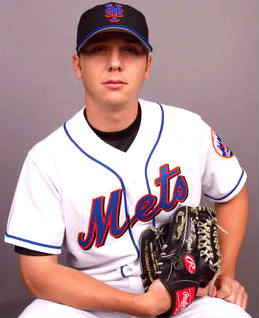 Former Met Scott Kazmir has won the fifth starter spot in the Cleveland Indians rotation. Do you care?

For many Mets fans the mere mention of Kazmir’s name elicits an emotional response. If you are one of those fans, I’m curious to hear your reaction to this news that the former phenom has won a job for a team that is expected to contend for meaningful games in September.

Here at MetsToday, we barely touched on Kazmir during the winter — only reporting that he’d been signed by the Indians. There hadn’t been much buzz about him — nationally nor in Flushing. It might’ve been a “feelgood” story had Kazmir been in Port St. Lucie this spring, a la the Jason Isringhausen reunion. Looking back to last November / December, when there were many free-agent arms looking for work and the Mets in need of pitchers to throw at the wall, I didn’t have much feeling one way or the other. With the benefit of 20/20 hindsight, I could be guilty of asking “why didn’t the Mets sign him?” but if I send myself back to early winter, I don’t remember hearing much about his comeback, so it was difficult to gauge whether it was worth taking a flyer on him. After all, the last we saw of him, he was struggling to top 84 MPH.

In any case, Kazmir’s velocity is now in the low 90s — at times flirting in the mid-90s — and he’s earned the #5 spot and a $1M contract that’s loaded with another $750K in incentives. For all we know, he’ll flame out by May, but as of today, Scott Kazmir is back in the big leagues, pitching for a team that is perceived to have a legitimate shot at the playoffs.

So what’s your take? Do you wish the Mets had given him a shot this spring? Do you think it would’ve been a bad idea, for whatever reason? Answer in the comments.

Back Pedro Feliciano Out, LaTroy Hawkins In
Next Chris Young Opts Out of Nationals Contract