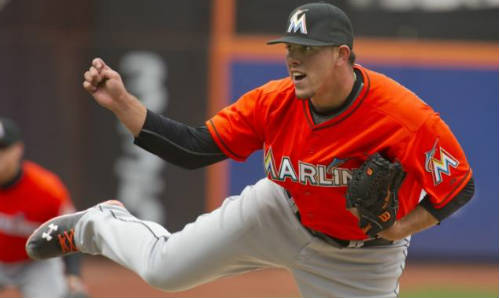 In need of an emergency starter, the Miami Marlins tapped 20-year-old phenom Jose Fernandez from A-ball. When asked if there was any economical concern over starting Fernandez’s arbitration clock, Marlins owner Jeffrey Loria stated in the Miami Herald,

Makes one wonder if the Mets believe Zack Wheeler is “unique,” doesn’t it?

“The consensus was this kid’s ready to handle it here, he’s ready to pitch here,” said Larry Beinfest, the Marlins’ president of baseball operations. “We think he’s ready to do it. It was not a decision that was made like, ‘Hey, let’s bring Jose up because he’s really good.’ We spent a lot of time around the kid. It just seems like he’s ready to do this. This is where he should be.”

Like the Mets, the Marlins are going nowhere in 2013 — they’re working toward a season in the future. Like the Mets, their fan base is losing interest, which means the turnstiles aren’t turning, which means revenues are down. So although the long-term economical reasoning might have suggested that the Fish keep Fernandez under water for at least the first two and half months of the season, Loria saw the situation differently. I can’t read his mind, but I’m guessing he believes that Fernandez’s presence could create excitement in Miami — the kind that gets those turnstiles going again. He might also be thinking, “hey, if this guy’s as good as we think, we’ll buy out those arbitration years anyway.” Or, maybe he believes he’ll have sold the team — or trade Fernandez — by the time he has to worry about the young pitcher’s salary escalation.

It could well be that Jose Fernandez is indeed more unique than Zack Wheeler. It could very well be that Wheeler isn’t as ready for the big leagues as is Fernandez. Maybe two and half months of minor league seasoning is exactly what Wheeler needs to be big-league ready. Or maybe, he needs even more time than that.

Back Mets Game 6: Win Over Marlins
Next Why Won’t Mets Get Aaron Harang?