In a matter of minutes, Zack Wheeler loses a no-hitter and a decision. But the Mets win.

For someone who didn’t allow a hit until there was one out in the seventh, Wheeler wasn’t exactly electric. He kept the ball near the plate, usually down, and the Fish were swinging aggressively — a good recipe. At times it seemed like the Marlins hitters were trying to see how quickly they could end their at-bats. My guess is that was due to a combination of young hitters being naturally aggressive, and the 95-96 MPH velocity from Wheeler that encouraged itchy trigger fingers. All in all, a nice outing for the young hurler.

However, I have to comment on his “outstanding delivery” — as described by Bobby Ojeda during the postgame. Ojeda made a point to mention that this delivery was not only “outstanding” but also consistent, and harped on the fact that he released the ball while a foot or more in front of the rubber.

Well, this is what I saw from that delivery: 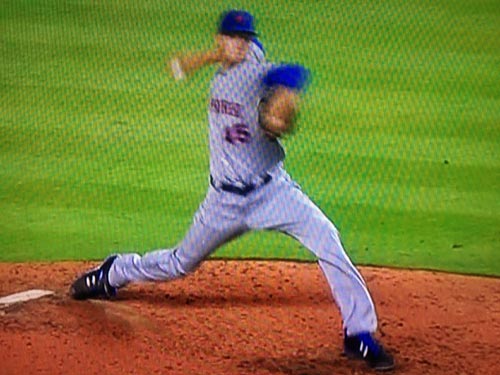 Yes, his back foot is starting to move ahead of the rubber. Not really a big deal — many pitchers do this, usually those with a long stride. Billy Wagner, Pedro Martinez, and Jordan Walden come to mind off the top of my head. The important parts of this picture are the landing (left) foot, the position of the ball / throwing hand, and the front shoulder.

First, the front shoulder: it’s clear that Wheeler is conscious of, and working very hard to, “stay closed.” He’s over-compensating to the point where he’s over-rotating the upper body, which is causing the front shoulder to open too early — ironically, the exact issue he’s trying to avoid. It’s a common occurrence, thanks to numnut pitching coaches who don’t know jack about human kinetics.

Secondly, and much more importantly, is the position of his throwing hand at “foot strike.” It’s far behind where it needs to be — at this point in his motion, the ball should be at a “launching position,” high in the air, ball pointed toward an area between second base and shortstop, with his forearm at a 90-degree angle to the ground. Being this far behind means there is undue stress on the arm to propel the baseball; all that stride and rotation is doing next to nothing (if anything) in regard to velocity. Wheeler’s fastball velocity is entirely dependent on his arm speed. This is not a “great” nor “outstanding” delivery as Ojeda describes — it’s bad, and dangerous. If he “consistently” throws this way, he will injure his arm quickly. His is very, very similar to Mark Prior‘s delivery — trust me, Prior’s injuries had nothing to do with chance, and everything to do with where his hand was at foot strike. That’s not my opinion, it’s the proven fact of scientists who study benign subjects such as human body movement. I’m sure that the Giants had an idea that Wheeler’s motion was dangerous, which was why they were trying to adjust it. Whether they knew exactly what the problem was, and how to fix it, is another story. And no, changing a pitcher’s motion doesn’t mean he’ll lose his effectiveness — IF the adjustment is made correctly. I’ve argued this point in the past too often, and not arguing it again — efficient, safe mechanics are ALWAYS better than the alternative and can only improve a pitcher’s effectiveness over the long haul.

As for Nathan Eovaldi, I like his fairly simple, compact motion — except for his follow-through, in which he remains almost completely erect. He throws really, really hard, but he doesn’t use his trunk and lower half to decelerate his arm — the brunt of slowing down his arm after release is completely on the arm itself, which I surmise is exactly why he suffered from shoulder issues earlier this season. Unless he starts bending at the waist and following through with his “nose to toes” and arm passing low, somewhere between his knee and ankle, he will continue to struggle with arm problems. Most people don’t realize that a pitcher can do as much — if not more — damage to his arm AFTER releasing the ball as he can before. Compare it to a 500-horsepower sports car with drum brakes — very quickly, those brakes will burn out. To slow down a car with that kind of power, you need disc brakes on all four wheels (and maybe a parachute).

Giancarlo Stanton did nothing in this game — he looked similar to the first series of the year between these two clubs: he looked tense, frustrated, angry, and swinging at anything and everything, committing his swing far too early.

Christian Yelich looks like an intense high-school sophomore in his first varsity game. He appears to have a nice, clean swing, but what has impressed me more than anything so far is his knowledge of the strike zone. He seems to have a really good idea on what is a strike and what isn’t. If he can combine that with good discipline, and learn how to isolate zones where he can best handle pitches, he should have a long MLB career. We’ll see.

The Mets and Marlins do it again at 7:10 PM on Wednesday night. Jenrry Mejia takes the mound against Henderson Alvarez. Since I am also playing, I may not be able to provide a proper postgame, so please pay attention and be prepared to enrich this site with great comments. Thank you.