Should Mets Fans Root for Wins or Losses?

At 63-75, Mets are currently a full game ahead of the Phillies in the NL East standings. However, that also places them in a tie with the Blue Jays for the 11th-worst record in MLB. As you may remember, only ten teams have their draft picks protected in the event they sign a free agent who received a qualifying offer from their former club. As you also remember, the Mets were shut out from this “protected” status last winter because the Pirates failed to sign their 2012 #1 pick. Well guess what? The Blue Jays are automatically in the top ten (bottom ten?) because they failed to sign their 2013 first-round pick.

So, considering the implications of not having their 2014 first-round pick protected, are you rooting for the Mets to continue to win over the final 24 games of the year, in the hopes they can finish in third place in the NL East and build momentum toward 2014, or are you hoping that they lose enough so that they drop into that pool of protected picks?

Fittingly (pardon the pun), today’s Mets Item of the Day is a pair of “Draft Pick Plaid” Mets boxers. I’m not sure what about the plaid pattern makes it “draft picky,” but, whatever — they look nice. Buy them at Amazon for $16.95 by following this link: New York Mets Draft Pick Plaid Boxers – Royal Blue (Large)

or clicking the image below (if in fact it shows up on your screen — still trying to figure out that issue). 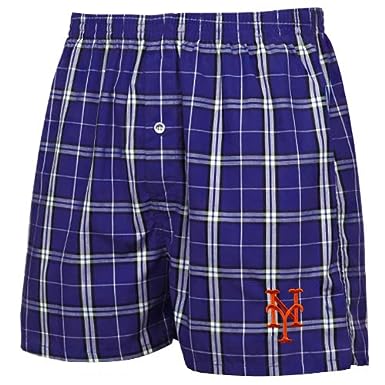