For a while there, it seemed like no one wanted to win this ballgame.

Interesting old-school decision by Marlins manager Mike Redmond in the top of the seventh to let starting pitcher Tom Koehler bat with two out and a man on second in a scoreless game. Not to mention, it’s September with expanded rosters. It reminded me of the ballgames of the 1970s and early 80s, when starters finished games regularly — if your horse was running well, you stuck with him as long as you were ahead, tied, or only a run down, because keeping him on the mound was your best chance of winning that day. And if he was keeping the other team scoreless, you stayed with him until he let up a run — because he was dealing, and the other team likely was being beaten mentally as well as physically by his presence on the mound.

Just what in the heck was Justin Ruggiano doing attempting to steal third with two out, score tied 0-all, and Logan Morrison at the plate? I can’t comprehend what he expected to accomplish with such a move. Did he not know there were two out? Even if he was able to get a great jump off of Gee and taken the base, I don’t know why he thought it was worth the risk. He had to have realized he didn’t get a great jump within a few steps, in which case there was still time to retreat to second base. But he was thrown out by ten feet. Horrible decision, horrible execution.

Another blunder on the basepaths came when Daniel Murphy was picked off first with one out in the seventh. He was caught leaning, but the real shame was that he was only about five feet off the base — a foot less than his body height. All he really needed to do was fall back and reach for the bag, but he was so fooled by Koehler, he was picked off.

An inning later, Murphy made a very poor play on a slow roller that allowed Logan Morrison to reach base safely — and advance to second when Murphy’s throw went out of play. Murphy followed that up by making an ultra-aggressive throw to third to cut down pinch-runner Adeiny Hechavarria. And he followed that by dropping a throw by Wilmer Flores on an attempted fielder’s choice. The first play was Murphy being himself and trying to do too much, and failing. The second play was Murphy being himself and trying to do to much, and being very lucky to succeed. The third play was arguably Flores’ fault, as he made a less-than-perfect throw. Ron Darling blamed Flores, but after watching the replay several times, I disagree somewhat, because what I saw was Murphy out of position and yet again getting his feet tangled. The throw wasn’t perfect, but it was leading him inside second base toward the pitcher’s mound, which is pretty much where you want it to have any chance of turning a double play as it takes the second baseman out of the way of the runner and clears him to turn and throw to first. Flores rushed the throw with the idea of taking a shot at the DP, and he threw it too low. Murphy should have been able to glove it and keep his foot on the base. As it turned out, the Marlins could not take advantage of the “Murphy inning,” so in the end, who cares — right? If the ends justify the means, then yeah, sure.

Murphy wound up being charged with two errors in that inning. Naturally, Morrison was awarded a base hit on what should’ve been a routine grounder had Murphy been playing at a depth that anyone not named Ron Belliard plays. Whatever.

I fully expected Andrew Brown to hit a homerun to end the game in the bottom of the tenth, especially once he got to a 3-0 count. Did you?

Can you just imagine if Travis d’Arnaud‘s grounder didn’t squeak through the infield in the bottom of the 12th? The Mets loaded the bases with none out and very nearly came away without scoring.

The Mets next host the San Francisco Giants at 7:10 PM on Tuesday night. Zack Wheeler goes to the hill against former Met prospect Yusmeiro Petit.

It’s mid-September, the Mets’ season has been over for a month and a half, and football games have begun — so how about we start looking at some tailgating toys? This is pretty neat – a New York Mets Keg-A-Que Charcoal Grill

. Pretty snazzy, eh? Buy it from Amazon by following the previous link or clicking on the photo below. 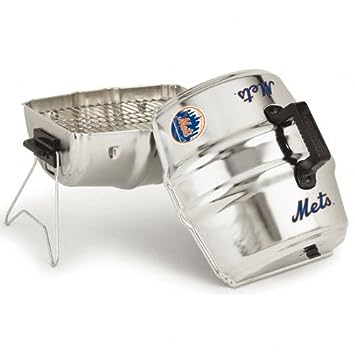