Ho-hum. Honestly, I was just waiting for the paint to dry … er, I mean, waiting for this godforsaken game to end. Then all of a sudden, the bottom of the ninth came, and like the last three minutes of a college basketball game, it was as though a switch was flipped and the contest was worth watching.

Aaron Harang and Carlos Torres combined for 12 Ks in 7 innings, though it came against 4 walks. The 4 runs allowed by Harang in 5 innings wasn’t so great, but what, really, can you expect of Harang at this point in his career, pitching for this ballclub?

Meanwhile, Matt Cain was absolutely brilliant, shutting out the Mets through 7 2/3 innings, allowing six hits and walking none. He truly deserved better, but, it was one of those rare nights when the San Francisco bullpen failed him. Hey, it happens.

Lots and lots of fans disguised as empty seats in the ballpark on this particular evening. Tomorrow’s afternoon game, however, should be bolstered by the hundreds (thousands?) of free tickets the Mets will give to local schools for field trips. Hope the kids have enough money to buy some foot-longs and sodas.

Kinda cool seeing Juan Centeno going into the low, one-knee stance behind the plate fashioned by only a handful of catchers throughout history — off the top of my head, that group includes, among others, Carlos Ruiz, Tony Pena, Joe Janish, Brad Gulden, and maybe Benito Santiago, if memory serves correct. Gulden was the first I ever saw doing it, and he apparently learned it from someone in the Dodgers organization, prior to joining the Yankees in a trade for Gary Thomasson. Gulden, by the way, is not the heir the to mustard fortune, but he is one of only four players in MLB history to be traded for himself.

Let’s go with another sweatshirt for this suddenly chilly weather. This time, though, one for the ladies — a New York Mets Women’s Full-Zip Hooded Fleece Jacket 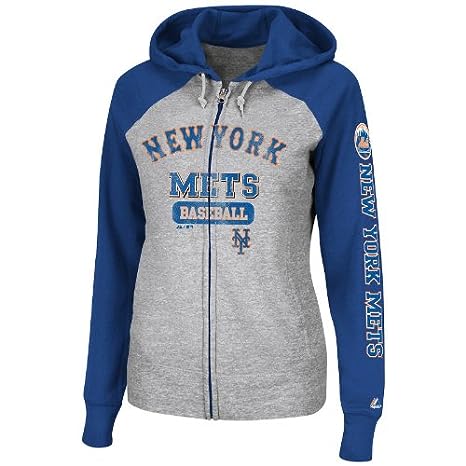