Lucas Duda fails in his attempt to be the next Scott Hatteberg. Justin Turner succeeds as a cleanup hitter. However, the Mets lose.

Carlos Torres was the starting pitcher. Turner was hitting cleanup. The Mets, however, are NOT trying to lose ballgames and gain a protected pick in next June’s draft, because, truly, it’s “irrelevant.”

Torres, by the way, heaved a ball into the upper deck after the fifth inning. According to Torres, he does this “all the time.” Strange that it was never before caught on camera, and it was never before noticed by the beat writers who attend every Mets ballgame.

I don’t think the Mets are purposely trying to lose. I also don’t think that the Mets front office purposely put a less-than-MLB-caliber team on the field for the last series of the season. Oh, no — that was something decided nearly a year ago. If you can’t beat a team with a lineup containing names like Scooter Gennett, Jeff Bianchi, Martin Maldonado, and Yuniesky Betancourt, then who can you beat?

Oh, I’m not being fair. After all, Gennett has been remarkable since Rickie Weeks went on the DL, and Maldonado looks like a decent catch-and-throw guy behind the plate. But try to explain the Milwaukee players to the average Mets fan — the one who is still wearing a Santana jersey to the ballpark and doesn’t recognize anyone on the current Mets roster other than David Wright.

Carlos Torres was bad. He’s not very good as a starter, despite his strong performances in his first few starts. As many may have guessed, it was likely the element of mystery as much as anything else that allowed him to pitch as effectively as he did in those initial spot starts. It’s just as likely that the scouting reports and video have caught up to the journeyman with the 87-MPH fastball. At least the Mets found out now, rather than going into 2014 wondering if perhaps he’d be a legitimate back-of-rotation candidate. He appears to be a very nice, standup guy and competitor, but he just doesn’t have the talent to pitch in excess of 60-70 innings at the MLB level.

Small things department: in the sixth inning, with the bases loaded and one out, Juan Lagares took a borderline cutter/slider for a called strike two. Lagares immediately looked back at the home plate umpire to question the call, then shook his head in disgust. Bad. I don’t mean to pick on Lagares, because I like him, but rather, to show this as an example why I was so hard on drama queens John Buck and Ike Davis — because the notion that veteran ballplayers provide examples for the youngsters is absolutely true. However, it has to be understood that veterans can display and promote both good and bad examples, and based on what my eyes have seen, the young Mets ballplayers have followed in the footsteps of the complainers. It’s bad for veterans to show up umpires, but it’s doubly bad for rookies to do it. There absolutely nothing positive that can come from outward displeasure with an umpire’s call, even if it’s in the form of body language.

Small things, part two: just a minute or so after Lagares struck out, and with the bases still loaded, Daniel Murphy, with his hair on fire, rushes home from third on a ball in the dirt that was smothered by Brewers catcher Martin Maldonado and is tagged out by ten feet to end the inning. Shame on Tim Teufel for not having a bucket of water available to douse Murphy’s head and snuff out the flames.

Between that ridiculous attempt, his weak RBI groundout in Thursday’s game on a 3-0 count, and various other examples throughout the year, it’s clear that Murphy often tries to do too much. His motivation is honorable, and might even be acceptable if he were a 22-year-old rookie. But at age 28, with five years in MLB, it’s time for Murphy to have a strong understanding of his strengths, weaknesses, and limitations, and apply all toward winning baseball. If you really value this kind of thoughtless effort, don’t waste your money watching pro ball — you’ll see it all the time at the high school level.

For what it’s worth, Terry Collins said during the postgame that he was okay with Murphy making that attempt, to “create a spark,” because, after all, the team is “not driving in any runs lately.” Sure. Accept, welcome, and encourage dumb baseball — sign of a great manager.

Small things, part three: in the following inning, down by two, Travis d’Arnaud led off with a clean count (thanks to Murphy’s attempt to score) and popped up on the first pitch he saw from reliever Rob Wooten. Not sure I love that aggressiveness in that situation. First off, it’s a good idea to take a strike when you’re down by two that late in the game and leading off an innings. Secondly, it’s also a good idea to take the first pitch from a new pitcher to gauge speed, track movement, and get one’s timing down. On the other hand, if you are the type of hitter who can drive the ball over the fence, and you’re zoning for a specific spot, it may not be such a bad idea to be aggressive and try to jack one, because it puts your team within a run. Is d’Arnaud there? Is he that kind of hitter? Honestly, I don’t know. I can’t get too upset with the aggressiveness in that situation, because we have seen flashes of power from the young backstop. However, if the Mets were down by three, there’s no way swinging at the first offering is acceptable. Your thoughts?

Murphy nearly allowed yet another “infield single” in the top of the 8th when Khris Davis hit a bouncer past the mound and pulled up lame with a pulled hammy a few steps from first base. But, why point that out? In the scorecard it goes down as 4-3, and it’s a point in Murphy’s favor in advanced sabermetrics for fielding — the stats that supposedly do a better job of evaluating glove work than the naked eye. The stats don’t lie!

For whatever reason, every time I heard either the WFAN broadcasters or GKR mention “Bianchi,” I thought they were talking about “the Yankee” rather than Jeff Bianchi.

Again, thank you for being patient with me and carrying the load / pulling up the slack in my absence this week. It’s greatly appreciated.

The Mets and Brewers do it a third time on Saturday at 4:10 PM. Aaron Harang goes to the hill against Jimmy Nelson.

Nearly a week into autumn, you probably have various outdoor cleanup activities and “honeydo” list items that involve some dirty work. You know what you need? Gloves. Work gloves. How about a pair of orange New York Mets New York Mets Utility Gloves

, too.) Click the previous link or the image below to buy them — they’re less than twenty bucks. 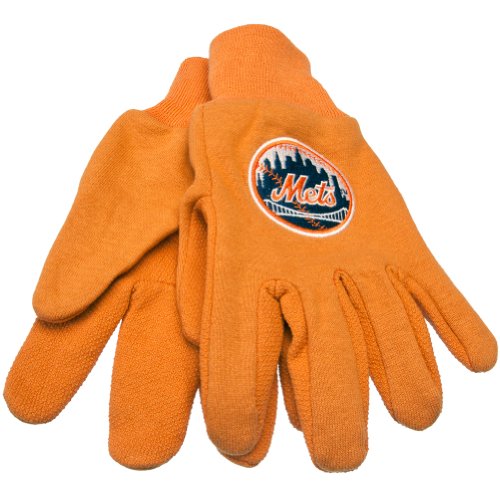 Back Mets Game 159: Loss To Brewers
Next Should Dillon Gee Pitch One More Inning?