WMCA Will Not Broadcast Mets Games 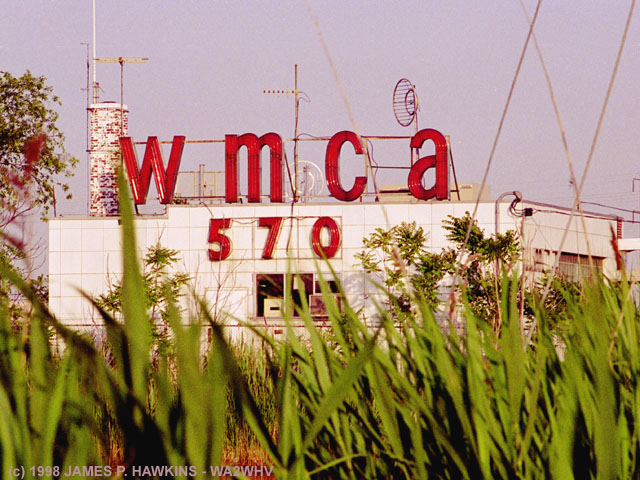 According to an official press release by the New York Mets, the team’s 2014 ballgames will not be carried by WMCA.

Well, that’s not EXACTLY what it stated; in fact, the release referred to a new partnership between the club and Clear Channel, announcing that games would be broadcast on WOR. 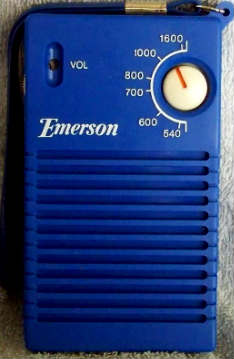 During my most formative years as a baseball fan, most Yankees games were shown on WPIX channel 11, a handful of Mets games on channel 9, and there was snow on channel 10 (and channels 3,6,8, and 12, for that matter). Most games began at 8 PM, my bedtime was 9, so even if the game was on my black-and-white TV (complete with aluminum-foil-covered rabbit ears), I spent most spring and summer evenings listening to Yankees and Mets games muffled by my pillow on a 9-volt battery powered Emerson “pocket transistor radio” (it looked like the one to the left, except the color was charcoal gray instead of Mets blue). The Mets and Yankees played on opposite ends of the radio dial, which made switching between them an excruciating odyssey through white noise and static, navigated by frequent maneuvering of the radio combined with deftly precise finger control on the dial. During magical moments of the night, one of the broadcasts would come through crystal-clear — or at least, as clear as a transistor AM radio could. Mostly, though, the sound was rife with crackles, whirrs, and buzzes, depending on the nighttime air traffic and the electrical appliances being used in the apartment next door. Of course, the stations I did not want to listen to came through as lucid as the telephone (back then, we ONLY had land lines, and calls were NEVER dropped — ever). Trying to find the stations I wanted was akin to finding a needle in a haystack — particularly in the case of 570 WMCA, which was where I’d find the Mets. It was supposed to be somewhere between the “600” and “540” on that dial, but, depending on the night, and how the radio was positioned, and whether or not the window was open, it might show up somewhere outside those boundaries. When both the Mets and Yankees were playing, I’d quickly rifle from 570 to 1010 in between innings, trying to maximize the time before falling off to sleep. It was an exercise in futility, as I’d usually wind up missing an entire half-inning trying to get the station in clearly again. After a while I’d give up and listen to only one of the games and deal with the commercials. If it was the Mets, I’d usually listen through at least the seventh inning, as Bob Murphy‘s bright voice kept me interested — a fascinating thing, looking back, considering that the lineups often featured Joel Youngblood, Doug Flynn, Frank Taveras, and Bruce Boisclair somewhere in the top three spots. On the other hand, if I settled on listening to the muted droning of Fran Healy at 1010 WINS, I’d drift off to sleep within an inning or two.

Fast-forward to my college years, when I found a shortcut to school that avoided Route 3 — the Belleville Turnpike. Heading south, and just beyond the heaps of garbage in Kearny, and sitting in the middle of wasteland (not a pun) along the Hackensack River was the WMCA transmitter building. The first time I saw it I almost pulled off the road. If it wasn’t 25 years ago, I would have pulled over, taken a picture, and posted it to Instagram, with the hashtag #memories. But we didn’t have smart phones then, and couldn’t afford a Polaroid.

In any case, when it was announced that the Mets would be leaving WFAN (or rather, that WFAN would be dumping the Mets), a small part of me was hoping to see the Mets return to WMCA. A strange thought, considering the struggles of my youth trying to obtain clear reception. Life’s funny that way.

Instead, the Mets will be on Clear Channel’s WOR 710, and there’s some history there — WOR-TV used to carry Mets games on channel 9, and the radio station carried some St. Louis Cardinals games after both NL teams left town in the late 1950s.

What was glaringly missing from the Mets’ press release, however, was the fact that Clear Channel is owned by Bob Pittman — one of the investors who bought into a $20M, 4% stake of the team. According to sources, Pittman did NOT buy an entire 4% stake on his own. Why was that detail not included in the announcement? Certainly, it had to play into the partnership. Is there something embarrassing or disingenuous about keeping broadcast rights “in the family,” so to speak? I would think not, especially since it’s also common knowledge that SNY purchased four full shares, or one-third of the total shares sold during last year’s “Save the Mets” telethon. (Some day, someone will explain to me how a company can own a company that owns it; I suppose it’s similar to marrying your cousin.)

In any case, while hunting down the above photo of an Emerson P-3300, I found an alternate model on eBay — crazy, right? Amazing the things you can find on the interwebs. 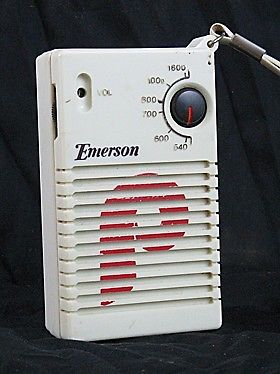 Speaking of finding things on the internet, now that the Mets won’t be simulcast on FM any more, you may want to head to Amazon and get yourself an AM radio. I HIGHLY recommend this AM/FM digital receiver from Sangean

— I’ve had this model for 5 years and can attest to its performance, which is excellent. It’s simple, lightweight, tiny, but not so tiny for my fat fingers and old eyes, and every station within range comes in clearly. Yeah, 35 bucks may seem high for a pocket radio, but trust me, you get what you pay for. 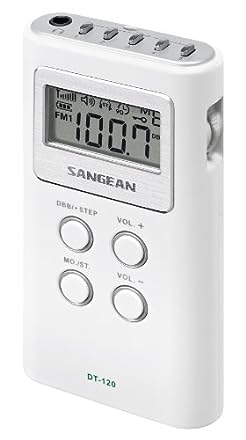 Oh, and you may want to pair up that purchase with these Mets-logoed ear buds 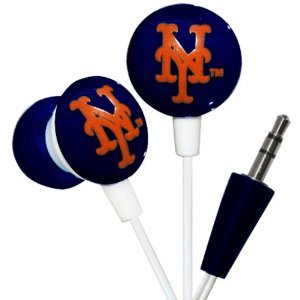