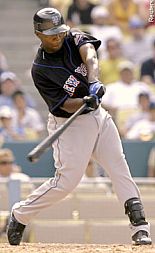 The news may not turn the baseball world on its ear, but Mets fans may be slightly interested to find out that Chip Ambres has signed a minor-league contract with the San Diego Padres and has been invited to spring training.

Chip spent nearly all of 2007 in New Orleans and played well, both in the field and at bat. While numerous Met outfielders injured themselves between April and July, Ambres was passed over again and again, despite swinging a good stick. The last straw came after Carlos Gomez went down with a wrist injury in at the same time Chip was in the midst of wreaking havoc on PCL pitching, batting .586 over a 7-game span and earning “Batter of the Week” honors. At that point, it would appear that the stars had lined up for the journeyman, but the Mets instead brought up his teammate Ricky Ledee.

Ambres was finally promoted at the end of July, and appeared in games on the 20th, 21st, and 22nd. That last appearance was, fittingly, the most memorable: his seeing-eye single in the top of the tenth scored Lastings Milledge to put the Mets over the Dodgers in a dramatic fashion. However, he didn’t have much time to celebrate, as he was sent back down to New Orleans — for good — two days later.

Ambres became a free agent after the season, and didn’t see a fit with the Mets in ’08. In San Diego, he could be a “last option” in the event Mike Cameron doesn’t re-sign and the Padres don’t find another centerfielder. He should at least get a crack at being a fourth or fifth outfielder, as their depth in that department is sparse.

Good luck, Chip, and thanks for the memory!

Back Three Years with Yorvit
Next Mets Establish the Market