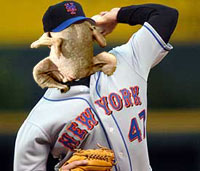 If I don’t post anything on Thanksgiving, do you promise to stay away from the computer and spend the day with your family feasting?

Unfortunately, I’m not sure I can hold up my end of the bargain …

Seriously though, since we are to give thanks on Thanksgiving, I’m going to do just that:

THANK YOU THANK YOU THANK YOU for visiting MetsToday and providing your comments throughout the year. Without you (yes, YOU) this whole blog thing is pretty boring, so I thank you greatly for making my fandom more complete.

Happy Thanksgiving to you and your family. Please have a fun, safe, enjoyable holiday!

BTW, if you are over the age of 21 and need to buy a bottle of wine for the holiday, you can check out my wine blog for ideas and last-minute suggestions.

Back Hold Up with Hernandez
Next Ultimate Mets Gifts