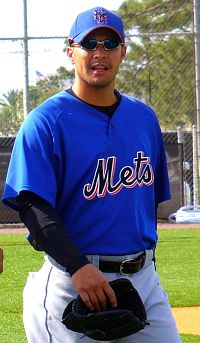 A little more than a week after non-tendering recuperating pitcher Juan Padilla, the Mets have signed Padilla to a one-year contract.

Padilla is determined to win back a bullpen role, and claims he’s “about 95%” right now.

“I want to get back on that mound,” Padilla said. “I won’t be a question mark anymore. I’ll be the Juan Padilla from 2005. No one will have to ask me, ‘How are you doing?’

“There’ll be competition, but I know if I’m healthy, I’ll be a tough decision. I won’t make it easy for them (to send him to the minors).”

The 30-year-old was outstanding in 24 games in relief in 2005, but has not thrown an MLB pitch since then. He had Tommy John surgery on his elbow prior to the 2006 season and a second operation on the pronator tendon in his forearm that caused him to miss 2007.

Though Padilla told the New York Times that he was “95%”, and his agent claims he’ll “be ready by spring training”, Mets officials are less optimistic — they don’t believe he’ll be ready by Opening Day.

Padilla pitched well through most of his eight years in the minors but was ineffective with the Yankees and Reds in his 2004 MLB debut. He split 2005 between Norfolk and the Mets and produced a 1.49 ERA and 1.02 WHIP in 36 IP at the MLB level. He was originally drafted by the Minnesota Twins, and, ironically, was traded to the Yankees (as the player to be named later) in a 2003 trade that sent Jesse Orosco to the Twins. The Reds plucked him off waivers from the Yanks during the 2004 season and the Mets signed him as a free agent during that offseason.

Before we get too excited about this signing, let’s remember that Padilla’s 2005 could have been a fluke — it was only 24 appearances. Further, we have no idea how he is going to come back after two severe injuries to his arm. Personally, I’m a big fan of Padilla and hope he can recapture the magic. But the rational side of me is managing expectations — in other words, we can’t assume that he’s going to jump right back into an 8th inning role if he proves to be healthy. Though, it would be nice.

Ben Johnson, the outfielder who was also non-tendered with Padilla, remains a free agent.