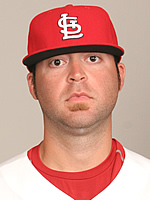 Stop the presses! The Mets have acquired a pitcher!

That’s right, he has a pulse and everything!

According to MLB.com and Joel Sherman, the Mets have come to terms with righthanded reliever Andy Cavazos, formerly of the St. Louis Cardinals organization.

Cavazos had a stunning MLB debut season, managing to allow and equal amount of hits and runs (27) in his 20 innings of work. He also walked 16 batters in those 20 frames, but here’s the good news: he struck out 15 and threw only 2 wild pitches. His 10.35 ERA was excessively bloated through no fault of his own — surely it was due more to the weak range of the St. Louis infielders and outfielders, a notoriously poor defensive group. Cavazos should see at least 6-7 runs shaved off that ERA the minute he moves into the vast confines of Shea Stadium and has genius catcher Brian Schneider calling the pitches.

For those who hadn’t already been following the illustrious career of this nine-year minor leaguer, Cavazos was originally drafted by the Rangers in 1999 for his athleticism — he was a hotshot shortstop and basketball standout at Brazoswood High School (Clute, Texas). After someone clocked him at 94 MPH on the radar gun, he was moved from the infield to the mound before getting chosen in the fifth round by the hometown Rangers in the same draft that produced Kevin Mench and Hank Blalock.

Stuck behind a number of brilliant arms in the perpetually pitcher-heavy Rangers organization, Cavazos caught a break when the Cardinals swiped him in the 2002 minor league draft. He responded to his good fortune by posting a sparkling 3.99 ERA with 10 saves and 5 wins in high A ball, being used as both a starter and reliever. The next year he was bumped to AA and posted a 6.14 ERA, but rebounded with a 3.41 ERA when demoted back to A ball in 2005, finishing the year in AA.

His breakthrough year came in 2006. He started well in AA and jumped right up to AAA, where he posted a 3.51 ERA in 44 appearances — striking out 55 in 56 innings and allowing just 47 hits and 23 walks. (Hmmm … sudden spike in performance … teammates with people like Rick Ankiel and Larry Bigbie … nah … ) He followed that up with another strong performance in AAA, again pitching in 44 games and this time posting a 3.21 ERA, with 48 Ks in 47 innings, before being promoted to the big leagues. In his minor league career, he has a 4.28 ERA, with 531 strikeouts, 303 walks, and 646 hits in 662 IP.

If things don’t work out for him as a pitcher, perhaps he can go back to shortstop. According to Baseball America’s post-draft analysis almost ten years ago:

“The most intriguing arm in the state may belong to RHP/SS Andy Cavazos, who has declared that he does not want to pitch; he wants to play shortstop on a full-time basis. Cavazos worked on rare occasions this spring. When he did, he showed exceptional arm strength, flashing a 94-mph fastball. His other pitches work well, but he’ll need a lot of refining–if someone can even persuade him to take the mound. Cavazos has good hands for a shortstop and an excellent swing … “

Also of note is that Cavazos is related to former pro wrestler Tito Santana, so he’s got an “in” there to fall back on if he needs it.

In all seriousness, I don’t think this signing is a big deal, though it might get Stephen Register and Brian Stokes a little nervous. I can’t get my hands on any recent scouting reports, and didn’t see him pitch with the Cardinals in ’07, but I’m going to guess that he’s a guy who throws really hard — so perhaps he’s supposed to fill the void left behind when the Marlins stole Marcos Carvajal from the system. Who knows, maybe the Mets will get lucky and Cazavos will turn out to be a decent arm to ride the Heath Bell Shuttle. The bullpen needs all the depth it can get, so I can’t criticize this pickup.

Back Top Ten Highlights of 2007
Next Roster Room