Later in the game, Omar had a guest sit next to him …. Sandy Koufax. This doesn’t happen at Shea. 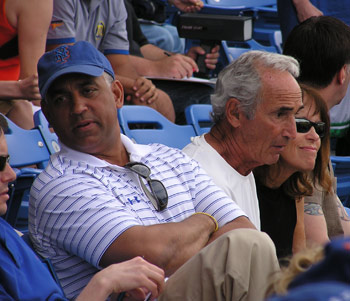 Hey Sandy, pass me the mustard?

It was starting to feel like a Knicks game, with all the celebrities in the stands. 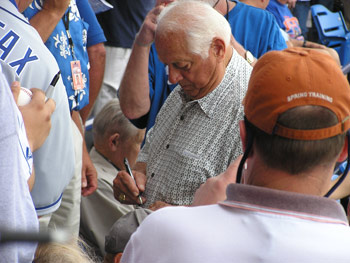 Only at Tradition Field do you turn around and happen to see Omar Minaya seated next to you.

Look closely, you’ll see a familiar face in the middle of the crowd. 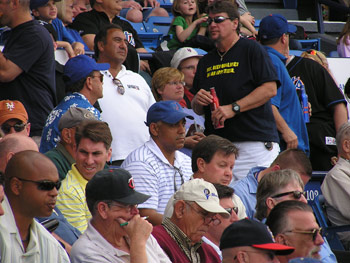 Brady Clark was the hero, winning the game in dramatic style by getting in the way of a pitch with the bases loaded to force in the winning run.

Matt “The Windmill” Wise pitched one inning to earn the victory.

Actually, the real hero was Ezequiel Carrera, who entered the game to play leftfield and made an Endy-like, game-saving catch in the 8th to keep the Dodgers from scoring. The table was set for Carrera to win the ballgame when he came to bat with one out and runners on second and third in the ninth, but walked.

At first glance, Ryan Church seems like a nice, quiet guy who will fit right in to the Mets lineup and clubhouse.

Not so fast … after reading a post and its comments on Capitol Punishment, I found out that Ryan Church is …

– maybe the dumbest guy on the planet;

– the victim of a golden shower;

In addition, I learned Church uses “Crazy Train” as his theme music, which in my mind is a good thing.

If Ryan Church is in fact the loudmouth bigot the DC fans know him to be, I think he may have a hard time in NYC. Time will tell.

I will not cast the first stone on any of this, but you are free to comment as you wish.

Hat tip to ‘Ropolitans for the original link at Capitol Punishment.

They’re up: various photos from the February 29th game against the Cardinals, at Tradition Field.

A few new posts below as well …

2. Parking is on a lawn, is easy, costs five bucks, and you get a free newspaper with it.

3. Leaving the parking lot after the game takes ten minutes instead of one hour plus.

4. You can get to your seat with a beer, a sausage, and a program in less than five minutes after entering the stadium.

5. You NEVER wait to use a stall in the restroom.

6. A “long line” at the concession stand is three people deep.

7. There are at least five “ceremonial first pitches” — and one of them is by the stock boy from the local Wal-Mart.

8. The last row of “Upper Reserve” is a great seat — better, in fact, than some field level boxes in Shea and better than anything in Loge.

9. You can hear Carlos Delgado encouraging the pitcher from the Upper Reserve.

12. Concessions workers are warm, friendly, and take their time — and you don’t mind a bit.

13. T-shirts are launched from a bungee cord instead of a pop-gun … except, the bungee doesn’t work and so the tees are thrown by Sandy Alomar, Sr.

14. There’s only one drunken, loud, obnoxious arsehole in the park instead of dozens.

16. Free taco if a Met pitcher strikes out the second batter of the second inning.

18. Speaking of planes, there are none flying overhead every 15 minutes.

Bonus: UV index is 7, so make sure you wear sun block!