Boof Bonser Out for the Year

Breaking news: Mets AAA pitcher Boof Bonser is undergoing Tommy John surgery and will miss the remainder of the 2011 season.

Not a huge loss from this blogger’s perspective, since I didn’t think Bonser had much value anyway. This elbow surgery comes almost exactly a year after returning from reconstructive shoulder surgery.

What do you think? Are these injuries just dumb luck or maybe his horrendous mechanics had something to do with it? Some day MLB clubs will factor in the delivery when they evaluate — and train — a pitcher. 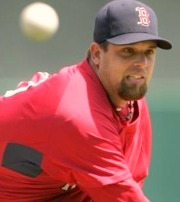