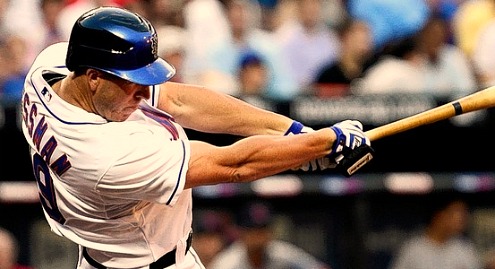 You have to like Mike Hessman for his size; if nothing else, he is a man you want on your side in the middle of a brawl or while walking down a dark alley.

Beyond that, Hessman didn’t display much value. Which is a shame, because he seemed like a nice enough guy – someone you could root for. And he has put up some ridiculous power numbers in the minors. Well at least he got the chance to taste the bigs again.

Hessman has already refused a minor league assignment and is therefore a free agent — so it’s unlikely he’ll return to the Mets organization.

Hessman turns 33 next March, and has run out of opportunities. He might catch on with Buffalo or another AAA team next year, but his chances of making the Mets – or any big league club, are slim. Still, I’ll be secretly hoping he gets a shot somewhere, gets into a hot streak, and truly enjoys at least a few weeks succeeding as a big leaguer. Chris Shelton, Kevin Maas, and Shane Spencer all enjoyed their ten minutes of fame – so why not Mike Hessman?

The Mets Are Sissies

Sissy is a pejorative for a boy or man to indicate that he fails to behave according to the traditional male gender role. Generally, it implies a lack of the courage and stoicism which are thought important to the male role. It might also imply interests seen as strikingly un-masculine. This pejorative may be given to anyone as an insult. Several variations, such as “sissy boy” or “sissy baby”, exist and any term can become pejorative or insulting if preceded by “sissy” and applied to a boy or a man.

Sounds about right for a team that is offended by Chase Utley making an aggressive but clean slide. Utley was (and is) playing the game the way it was meant to be played. There was no malice in his slide, nothing “dirty” about it — other than the fact he soiled his uniform pants. Why people are even focusing on “the slide” as if Utley did something wrong is preposterous — if anything, it should be an example of instruction on how one is to slide hard but cleanly in an attempt to break up a double play.

The press has turned this slide into an event, probably because the Mets are so damn boring and uninspiring that they’re hoping to artificially create excitement. They cajoled lame duck manager Jerry Manuel into suggesting that his team will “take care of it” by sliding hard into Utley. Um … how about sliding hard into Utley ANYWAY, since that’s what a player is supposed to do on a DP attempt? David Wright’s response was similarly off-base:

“We’ll reevaluate the way that we go into second base. … He’s a second baseman. If he wants guys sliding like that into him then it’s perfectly fine. … It’s a legal slide. It’s within the rules. But somebody’s going to get hurt. … He knows the difference between a good, clean slide and a slide that’s late. … Chase plays the game hard. He plays the game passionately. But there’s a thin line between going out there and playing the game hard and going out there and trying to get somebody hurt. That’s a thin line. Nobody’s going to go and push us around. We’re going to have our teammates’ back. I think cooler heads prevailed, but we’ve got to let them know that over on our side, we didn’t appreciate it, and we’re going to go out there and have our teammates’ backs. … If he doesn’t mind guys coming like that after him, then everything’s good.”

Bad move, David. Because Utley did not cross that line. But more importantly, Wright has more or less promised that Utley will get taken out — possibly by crossing that “thin line”. Which means that if Utley does not get upended or knocked down at the plate, the Mets will transform from simply sissies to “sissy marys”; from Urban Dictionary:

Someone who chickens out of doing something after promising to do it.

It’s a lose-lose situation — if they don’t do something, then they’ve publicly cowered to the Phillies based on an imaginary issue. But if they do initiate something against Utley this weekend, they’ll look like whiny sore losers to everyone except the most blindly diehard Mets fans. It would not be unlike the situation we saw in Game 161 of 2007, when Miguel Olivo charged Jose Reyes. The Marlins were at the end of a long, frustrating, disappointing season, were down 10 runs in the ballgame, and thus Olivo’s act was pathetic desperation — not any kind of “grit” or “toughness”. The Mets are in a similar place right now, and knocking Utley on his backside will not turn the team into something they haven’t been for several years. Let’s face it — in addition to underperforming and lacking the talent to reach the postseason, the Mets would not have been described as a “hard nosed” team for a long, long time.

Though, if the Mets and Phillies do get into some kind of rhubarb, I’m liking the Mets chances — particularly with beasts such as Lucas Duda, Mike Hessman, and Chris Carter jumping off the bench.

Deja vu all over again.

The last time Johan Santana and Jaime Garcia hooked up, the result was a 20-inning snorefest. Both starters were absolutely spectacular, each leaving after 7 frames of shutout ball.

This time, the matchup was kind of the same, only different. Like the last time, Santana and Garcia had similar outings — except, they were both the opposite of spectacular. OK, that’s not fair — Garcia wasn’t that bad (though Johan was). Santana allowed 7 runs on 13 hits and a walk in 5 2/3 innings. Garcia went one more out, finishing a full six, and he gave up “only” 3 runs on 6 hits and 3 walks. Immediately after Garcia left the game, however, flamethrower Mitchell Boggs came in and allowed four scores to make it seven-all. Then, the snorefest began.

There was another difference contrasting this extra-inning game and the one from mid-April: Francisco Rodriguez made an appearance BEFORE tossing 100+ warmups in the bullpen.

Oh, one other difference — the Mets didn’t win. Shame, really, because they tried so damn hard, fighting back and all.

We already posted Johan’s numbers, and he did look pretty awful. His velocity was around 89-91, but he was laying his fastball over the middle of the plate, belt high, during his entire outing. Eventually, Major League hitters will hit a 90-MPH fastball over the middle of the plate — and hard. When he wasn’t serving up meatballs, he was missing the strike zone completely on all pitches. My eyes saw him getting under the ball frequently, particularly on the changeup — meaning, his elbow was lower than normal, and his fingers were underneath or to the side of the ball at release. The result is something that looks like “pushing” the ball, and poor command.

Prior to this start, Santana had allowed only eight runs over his last 44.0 innings dating back to June 26th. The 13 hits he allowed were a career high — his previous high was 12 hits, accomplished twice, most recently on July 24, 2009 with the Mets at Houston.

Mike Hessman is a big dude — like, Troy Glaus big. He’s a monster. He’s so big, Ike Davis looks small standing next to him, and Ike is a pretty big dude himself. Discussing his size with friend and fellow blogger Matthew Artus , Matt put it best by saying: “the Empire State Building looks small next to Hessman”. No argument here.

In the bottom of the 6th, David Wright led off with a rocket off the base of the left field fence, and was thrown out by Matt Holliday trying to stretch a single into a double. Moments later, Carlos Beltran blasted his first homer of the game. Most Mets fans and media likely will point to Wright’s over-aggressiveness as the reason the game was lost, since after all, had he remained on first base, Beltran’s bomb would’ve been a two-run shot and the Mets would’ve eventually scored 8 runs instead of 7 and they would’ve won and the game never would’ve gone to extra innings. However, I am not sure that Beltran would’ve gotten that same exact pitch with Wright standing on second base. Pitchers choose their pitches based on the situation, and oftentimes will go with a “chase” pitch with runners in scoring position. With one out and the bases empty, Garcia tried to sneak a fastball by Beltran, figuring that if he hit it out, it’s only one run. With a runner in scoring position, he may have started Beltran with a breaking pitch, or a fastball in a different location.

The final out of the top of the 13th came when John Jay tried to score from third on a wild pitch. Josh Thole flipped the ball in plenty of time to Raul Valdes, and Jay tried to slide around Valdes. Maybe I’m old school, but if I’m John Jay, I am tearing into Valdes full-force like an offensive guard on a sweep and demolishing him to try to knock the ball loose. As a Met fan, I’m glad Jay didn’t do that, but as a baseball fan, I wonder why players are so soft these days.

With this loss the Mets have dropped three extra-inning games in eight days.

All eight runs scored by the Cardinals came with two outs. The Mets have allowed 170 runs to score with two outs — almost 43% of the total runs they’ve allowed (398). I have no idea if that is a significant stat.

This was the longest game ever at Citi Field, in terms of innings (13).

The rubber match occurs on Thursday afternoon at 12:10 PM (huh?). R.A. Dickey will be taking the hill against Blake Hawksworth of the Cardinals.