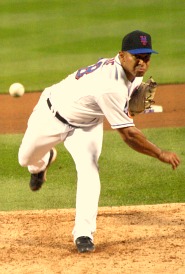 Nieve isn’t currently on the Mets’ 40-man roster, and he finished the year in AAA Buffalo, and he didn’t pitch for the Mets after July 21, but I felt it necessary to evaluate him anyway.

Despite being on the roster for only 95 games, Nieve found his way into 40 of them. He appeared in 20 of the team’s first 31 games of the year, a pace that had him on course to threaten Mike Marshall’s MLB record of 106 games in one season. Manager Jerry Manuel kept putting Nieve on the mound, seemingly intent on seeing his arm fall off.

Manuel’s argument was that Nieve was his best option out of the bullpen at the time – and to an extent it was true, as Fernando held batters to a .191 average in April. But continually putting Nieve into ballgames was blatantly irresponsible and screamed of desperation by a manager managing for the short-term security of his job rather than for long-term production of a team over the course of a 162-game season.