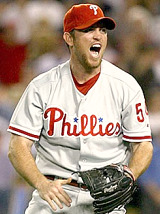 The report is that Phillies closer Brad Lidge has been placed on the 15-day disabled list with a sprained knee.

Catcher Paul Bako has been promoted to replace Lidge on the 25-man roster.

I can’t decide if this is a good thing or a bad thing for the Mets. On the one hand, the Phillies are without their closer. On the other hand, their closer was blowing games for them, and seemed on the brink of a complete breakdown. I would have felt a lot better about the Mets’ chances down three runs going into the ninth with Lidge looming on the mound, as opposed to Ryan Madson. Madson is no Mo Rivera, but right now he’s a heckuva lot more reliable than Lidge.

If anything, it pushes Madson into the ninth, and out of the “bridge” from innings 6-8. Though, the men left on the bridge have been performing well — Scott Eyre, JC Romero, and Clay Condrey all have ERAs below three. The weak links that could become exposed in the sixth or seventh frames are Chad Durbin, Jack Taschner, and Chan Ho Park, who was recently demoted to the bullpen after failing in the starting rotation.