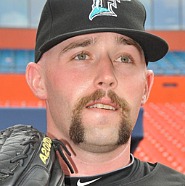 As you can see by the picture to the left, the Mets have re-signed Dick Tidrow. Tidrow last pitched for the Mets in 1984, sporting a 9.19 ERA through 11 ballgames before being released. We thought it was the end of his career, but he never officially announced his retirement; thus, the Mets, needing a swing man who can start, setup, or provide long relief, signed “Dirt” to a one-year deal.

Wait … that can’t be right, can it? Dick Tidrow must be at least 60 years old … that’s almost as old as Julio Franco for goodness sakes … but it sure LOOKS like him.

Yes, the Mets have finally made a big splash, inking Tankersley to a minor-league deal that includes an invitation to spring training.

This is a very “smart” signing, in that Tankersley’s father is a nuclear physicist. The Mets new “braintrust” seems to value intelligence — perhaps because two-thirds of the Fantasy Front Office consists of Ivy Leaguers. The Mets also signed high school valedictorian and Duke grad Chris Capuano, and are hot for Princeton alum Chris Young. If nothing else, they’ll have a heckuva crossword puzzle team.

As for whether the Tankersley signing is a “smart” one in baseball terms remains to be seen. The soon-to-be 28 year-old lefthander posted a 7.50 ERA in 27 games for the Marlins last year, after missing a good chunk of 2009 on the DL with an elbow injury. He had surgery on the elbow, but not the Tommy John ligament replacement type; it was the old-fashioned screw-insertion type, to correct a recurring stress fracture. Apparently, he originally suffered the fracture in 2008, but it never healed, so surgery was performed in April of 2009. He resumed throwing in July of ’09, but didn’t pitch in a game again until 2010. Last year he spent the bookends of his season in AAA, striking out 22 in 26 IP, posting a 3.42 ERA and 1.06 WHIP. During his big-league stint from May to mid-August, Tankersley was used exclusively as a LOOGY; he tossed only 12 innings in those 27 appearances, striking out 7, walking 7, and allowing 4 HR. However, all 7 of those strikeouts came against lefthanded hitters; he faced 35 in all, so he struck out 20% of them. This is where the smart guys come in and clean up, you see … in the numbers. The Ivy Leaguers are good with calculators, and they saw that last year’s LOOGY — Pedro Feliciano — struck out 25% of the lefties he faced (35 of 139), but Feliciano wanted 2 years and $8M for that kind of efficiency. In Tankersley, they pay the MLB minimum, for only one year, for similar performance. Kind of. You see, Tankersley’s is a small sample size, and there’s that high walk number. And the one homer given up to every 14 batters (Feliciano allowed one dinger out of the 280 batters he faced).

Stepping away from the numbers, what can you expect from Taylor Tankersley? He’s a bulldog, and always has been, going back to his early days in the minors. This is a great attitude that a manager loves, of course, but it might also have been partly to blame for his elbow injury — he’s so tough that he likely pitched through pain that he shouldn’t have, and may have made his injury worse as a result. Before the surgery and elbow issues, Tankersley hummed his fastball in the high-80s, topping out around 92, and threw a pretty good slider; you might have compared him to Jesse Orosco in his 30s. Last year, after the surgery, he averaged around 85-87, topping out around 89-90, with a less-biting slider; you might have compared him to a Jesse Orosco in his mid-40s. He throws from a low three-quarters arm slot; not quite as low as Feliciano, but actually, closer to where Orosco threw from.

Perhaps most importantly, if both he and Taylor Buchholz can make the team, it will be the first time in Mets history that two pitchers with the first name of “Taylor” will be in the bullpen. The last time the team had two “Taylors” in the bullpen occurred when catcher Hawk Taylor warmed up fireman Ron Taylor in 1967. Hmm … is it just a coincidence that Ron Taylor eventually became DOCTOR Taylor, and was perhaps one of the smartest baseball players of his era?