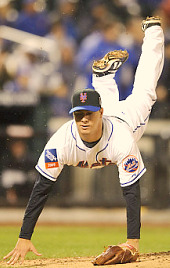 It was a case of right place, right time for the small-town, German-born boy, as Stoner pitched the game of his life and was drafted in the 16th round that June. As Stoner himself admits

Oh, did I misspell “Mets” in the headline? Sorry, I get the words confused when discussing the baseball club in Flushing.

According to Mack’s Mets, Tobi Stoner has ticked off his teammates, who are offended by his “cocky attitude” and inability to adhere to unwritten rules that apply to MLB rookies — to the point where Francisco Rodriguez (who is not cocky?) instructed Stoner to perform an impossible act on himself. Hmm … is Stoner really “cocky”, or simply “German“?.

Mack suggests that Stoner’s failure to make nice with his teammates is the reason he hasn’t seen much time on the mound lately. Maybe, though his mediocre stuff and two homers allowed in nine innings aren’t helping, either.

In other news involving Mets rookies, Fernando Martinez was mugged in an amusement park in the Dominican Republic. According to the Latino newspaper Diario Libre via Adam Rubin:

His wallet reportedly was stolen “with US$2,000, four credit cards from American banks and some important documents like his Dominican ID. It was stolen while he was in a party with some relatives in an amusement center near his native town, Rio San Juan, in the north of the Dominican Republic. The name of the place where the incident took place is Drink Together, on the road Rio San Juan-Cabrera. He called to the program La Opcion de la Manana 93.3 FM (The Option of the Morning) to confirm the fact and he promised a reward to whomever gets him the documents.”

The credit cards can be canceled, and the Dominican ID shouldn’t be too difficult to replace (and he can probably get one that makes him 16 again), but let’s hope he didn’t lose his passport or work visa — otherwise he may not get them back in time for spring training.

(Hat tip to loyal MetsToday reader “Walnutz” for these links)

How low have the Mets sunk? Someone is trying to make his feet more popular than the Mets. He may be succeeding.

According to MetsBlog, the Mets have released Livan Hernandez and activated Billy Wagner from the DL.

Though Livan has struggled mightily in his last three starts, I’m mildly surprised if only because I don’t know who is going to take his spot in the rotation. Nelson Figueroa? Tim Redding? After seeing two three-inning starts by Bobby Parnell, and getting lucky to get 5 innings out of Ollie Perez, you’d think the Mets would reserve those two for long duty.

Hopefully this clears the way for the Mets to promote Lance Broadway or Tobi Stoner to get a look-see. Today happens to be Broadway’s 26th birthday, and though he’s been awful in AAA, you’d have to think he has a better shot at making the 2010 roster than Tim Redding.

Looking forward to seeing Billy Wagner in action … if he can crank it up to 95 MPH, the Mets will have a nice trading piece — or setup man for next year.