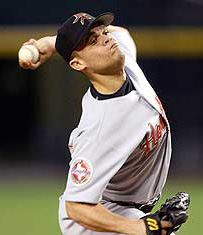 For the uninitiated, this is the hypothesis stating that the New York Mets cannot beat a rookie lefthanded pitcher they’ve never seen before. It’s named for a late July evening in Houston in 2005, when then-rookie Wandy Rodriguez looked like the second coming of Sandy Koufax against the New York Mets — despite entering the game with a 6.18 ERA.

The “Wandy Effect” has played itself out many times over since that night, executed by such talents as Eric Stultz, Hong-Chih Kuo, Jorge De La Rosa, Jason Vargas, Paul Maholm and Cole Hamels. (OK, Hamels and maybe Maholm are decent, but they were green nobodies when the Mets saw them.) Why the Mets have such a struggle against unknown lefties is curious; perhaps it’s a curse. Now that they have a minor league team based in N’Awlins, you’d think the Mets would talk to a voo-doo expert or soothsayer about the issue.