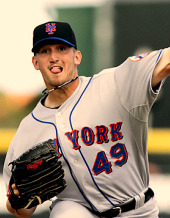 If we were putting grades on these analyses, Jon Niese would have to be given an “incomplete”.

After three starts as a 21-year-old in September 2008, Niese showed nothing to make any level-headed, objective party to believe he would be “ready” in 2009. Further, there was some question as to why the Mets would be in such a rush to force this young man to the bigs. He was making good progress in his jump from low-A to high-A, and did well going from A to AA. After 22 strong starts in AA, he was pushed to AAA, where he pitched 7 times before making his first MLB start — in the middle of a tight pennant race. Predictably, he fell flat on his face, unable to get past the third inning in two of his three starts. But, he pitched a remarkable eight innings of shutout ball against the Braves in between, prompting many Mets fans to believe he was the next Sandy Koufax.

It made a better story, after all, rather than considering that perhaps his success had something to do with the element of mystery — something referred to as the “Wandy Rodriguez Effect” here a few years back. In other words, young pitchers often have an advantage in their first time facing teams, because the hitters haven’t seen them before and there are no scouting reports.

But many didn’t consider that, and they ignored his other two, awful starts, clinging to that 8-inning masterpiece with delirium and unrealistic hopes.

As it was, Niese held his own in AAA in 2009. For a 22-year-old at that level, he did well. But, he did not dominate. And again, he did not show anything in particular to suggest that he was ready for prime time. He made 16 starts, averaging a shade under six innings per. His 1.28 WHIP and 82 Ks in 94 IP were good. Not great, but good. But “good” in the Mets farm system equals “great”, so he was promoted to the bigs again.

Niese made 5 MLB starts. One was good, one was awful, one was very good, one was so-so, and the final outing was over by the second inning, after he suffered his season-ending hamstring tear. I would like to point out that the “awful” outing came against the Braves — the same team he shut out over 8 frames in September 2008. It was his first start against the other four opponents.

Don’t read me wrong here. I like Jonathan Niese. I believe he has a world of potential. His big frame, smooth overhand delivery, and sharp 12-6 curveball suggest that he has the raw tools to one day develop into a legitimate MLB starter. A great one? A good one? An average one? Who knows? The only thing that’s certain is Jon Niese is nowhere near ready to be counted upon to take the ball every fifth day for a championship club. He needs to learn better command of his fastball. That nasty curveball needs to be more consistent. He needs more work on the change-up. He may need to figure out what pitch is best as an “out” pitch against MLB hitters (a “strikeout pitch” in the minors doesn’t translate to MLB). The jury is still out on how he responds to adversity. He can hit fairly well, but otherwise we don’t know about the rest of his ballgame (bunts, fielding, holding runners, etc.). I see him holding a spot in the Mets’ rotation some day, but I don’t see it happening in April 2010.