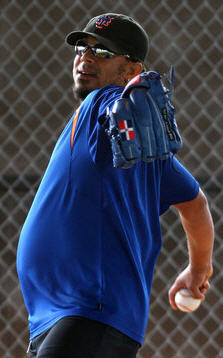 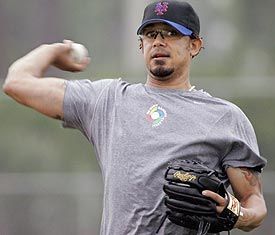 Last year at this time, Duaner Sanchez weighed in at a sloppy 230 pounds. Now he’s down to 205.

“Now I’m in the best shape of my life,” Duaner Sanchez said. “I haven’t looked like this since I was 19.”

His weight and lackadaisical attitude drew the ire of Willie Randolph, who reprimanded him on more than one occasion — and sent him home.

“I had to get more serious than before and be more responsible,” Sanchez said Tuesday after a workout at the Minor League complex. He has arrived before many of his fellow pitchers. “I wasn’t giving it my best last year. Willie was right to be mad.”

What motivated him to lose all the weight?

“That picture on MetsToday.com made me sick to my stomach — and I had a big stomach at the time so you can imagine how sick I was. Just because my nickname is Dirty and my stuff is filthy doesn’t mean I have to look like a big fat pig. If not for seeing my sickening, bloated self on MetsToday.com I would have never had the motivation to lose the fat. I owe it all to MetsToday.com.”