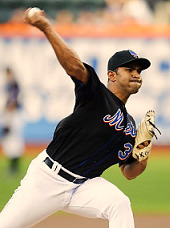 First of all, he has to come back 100% healthy from a major tear in his thigh. That’s simple enough, but there are two other related considerations. First of all, he has to heal and rehab under the Mets’ guidance — and you know how well that’s gone. We can only hope that since the season is over, better and more conservative decisions are made in regard to rehab. We also must cross our fingers that Nieve has remained active during his time away from the field — the memory of Duaner Sanchez bloating to whale-like proportions during his recovery still sticks in the mind. Of course, Nieve is not Sanchez, and so it’s not fair to suggest that Nieve has been irresponsible about his conditioning — truth is, we haven’t heard anything about Nieve since that fateful day in Atlanta.

The second consideration is his elbow. Nieve had Tommy John surgery in late 2007, and it generally takes about two years to make a full recovery. However, THAT recovery was stunted by the leg injury, which means he could be another 6 months behind.

Though, he was touching 96 MPH occasionally, which is fast enough to be successful. Whether he ever makes it all the way back to the 98-99 MPH velocity that made him a top prospect with the Astros is questionable, but it may not matter — if he can continue to display that nasty change-up.

In his short stint, Fernando Nieve showed flashes of brilliance. He definitely has the ability to make big-league hitters swing and miss, but his command and consistency are both sketchy. After missing a year due to the TJ surgery, what Nieve needed most was to log innings, and instead he suffered another setback to his once-promising career.

Personally, I believe Nieve has the raw stuff to fill a role on a championship pitching staff. At the very least, his hard sinking fastball is a plus pitch and on its own, enough to make him an impact middle reliever / swing man — think Ramiro Mendoza of the 1997-2002 Yankees. But he really needs to throw as much as possible to gain command of that sinker and his sometimes-lethal change. Only 27 years old, he still has time on his side — but will the Mets have the patience?

In an ideal situation, Nieve starts the year in AAA as a starter and gets in the innings needed to polish off the rough edges — and return as either a decent back-end starter or a strong middle reliever / setup man. What’s more likely to happen is this: he’ll light up the gun at 96-97 MPH early in spring training and immediately be slotted into a bullpen role. As a reliever, he won’t get the necessary reps to develop his command (see: Bobby Parnell) and will be an inconsistent situational reliever who frustrates his manager and pitching coach, because he “has all the tools but can’t seem to put it together”.

Back Mets: Who’s the Boss?
Next Teufel Back – Wally Next?