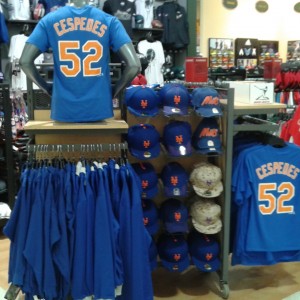 Well, now it’s official: the 2015 Mets have entered that rarefied air that only a handful of previous Mets teams have ever experienced. They are an “it” team, on one of those magical runs that comes along all too infrequently in team history. This shot, taken in a sporting goods store in Easton, PA, which is normally the intersection of Yankee and Phillies territories, tells you all you need to know. A fellow Mets fan remarked to me that they must have had that stuff in storage for years!

As for the game itself, the Mets weathered superlative performances from Bryce Harper (2 HRs, 12 total bases) and Steven Strasburg (13Ks). Like a patient boxer taking a few jabs, the Mets waited until Washington lowered their guard ever so slightly and then struck hard, with homers from Kelly Johnson and Yoenis Cespedes. In a matter of seconds it seemed, the Washington Nationals where flat on their backs, staring up at the lights, contemplating plans to make tee times for early October.

Much has been written about the Mets July additions of Cespedes, Juan Uribe and Tyler Clippard. Johnson has been somewhat easy to overlook, but he has been Terry Collins’ secret weapon of sorts since his arrival. He is the epitome of “veteran presence” (read his comments about his approach against Strasburg last night) and his ability to play all over the place has allowed Collins to give a few guys a breather and/or avoid being overmatched. Wilmer Flores had a tough night against Strasburg, but Collins had the option of using Johnson instead of the 23-year old Flores in the 8th. In the 9th, Lucas Duda, Travis d’Arnaud and Michael Conforto showed the Mets can also manufacture runs, combining to put a big insurance run on the board. Jeurys Familia did the rest. When I saw Matt den Dekker was the Nationals last hope, I knew the game was in the bag.

So, the Mets sweep Washington, opening a seven game lead with 23 left to play. Washington is nearly finished, their pitching staff is in disarray, their manager appears to have lost all confidence in himself and some of the team’s veterans look like they’ve quit. They really miss Clippard and Adam LaRoche, which is what I proffered here. The Mets buried the rest of the division with their hot April start, so we are looking at a virtual victory lap between now and the start of the NLDS on October 9, hopefully at Citi Field.

This is an epic time in team history and as a fan since 1971, I  am savoring every moment. The trades GM Sandy Alderson made in July should go down in Mets lore, as they completely altered the season’s (and maybe the franchise’s) trajectory. By the way, just how  smart is Mr. Moneyball, Billy Beane really? While his Oakland team flounders in last place, he can contemplate that in under a year, he traded away both the AL and NL MVPs.  Yes, I know, Cespedes probably won’t win it, but Harper will likely be watching, rather than playing baseball this October.

On a much more somber note, Friday marks the 14th anniversary of the horror that was September 11, 2001. Much water has passed under the bridge since then, but it’s a good opportunity to pause and reflect on the blessings that we do have in this life and to acknowledge the sacrifices of those who put themselves in harm’s way so we can enjoy things like baseball games.

Back Harvey: Two Sides Of The Same Coin
Next Mets Game 143: Win Over Braves