There are two Mets spring training invites who happen to be former NYC high school stars — and with a little luck, one of them might make the big club come April.

If you were paying attention to — or playing — high school baseball 10-15 years ago, then you may already know the names Nelson Figueroa and Ruddy Lugo. In fact, there are some MetsToday readers who have batted against Lugo.

Just in case you see these guys at Peter Luger’s a month from now, here are some pics: 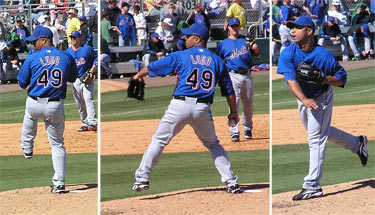 After seeing them both briefly during my trip to spring training, I’d have to say that Figueroa has the best shot, between them, of making the team — though both are longshots. Ruddy is still raw, throwing with good velocity but not much control. Figgy is just the opposite — a guy with not much velocity but good command and plenty of guile. To me, Figueroa is a “poor man’s Pedro” — a guy who “pitches backwards”, using his change-up and curveball to set up his fastball. He never the throws a pitch at the same velocity or to the same location twice in a row, and lulls a batter with his 78-84 MPH junk before freezing him with an 89-MPH “heater” that looks more like 99 after all the slow stuff. With a few good outings and some luck, Figueroa could wind up stealing the last bullpen spot. So far, luck is on his side — the Mets are reportedly shopping holdovers Scott Schoeneweis and Jorge Sosa, and Tony Armas, Jr. has yet to report due to visa issues. The longer he hangs around, the better chance he has of winning a spot. 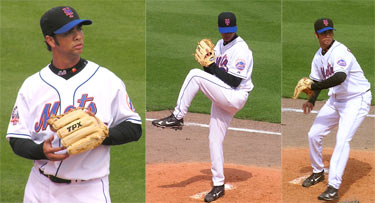 Back Pitching to the Strings
Next Pelfrey Looks Strong