Over at the SNY site, Ted Berg has made a very unpopular proclamation, in regard to Angel Pagan:

There are plenty of arguments for Pagan opening the season in left field for the Mets, nearly all of which focus on his impressive Spring Training performance. I want to take this time to remind everyone jumping on the bandwagon that he’s enjoyed a run of success over merely 43 meaningless at-bats. Maybe he’ll fill in admirably for Moises Alou and prove me wrong, but color me skeptical. 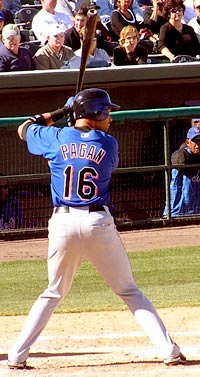 As much as you might think I’d like to disagree with Berg, the fact is, he beat me to the punch.

Like Berg, I’m a huge fan of Angel Pagan and hoping against hope that he can keep up the hot streak. If you’ve been reading this blog for a while, you know I love guys such as Pagan who play the game “right” and do all the “little things”. But the fact is — as Berg pointed out — the Mets can’t expect to succeed over a long period with Pagan in left field.

Ryan Church is only average offensively in right field — I’m not even sure he’ll outperform Shawn Green with the bat. Brian Schneider is expected to be slightly better than Rey Ordonez in the 8 hole. Carlos Delgado has me frightened — as much as I love Delgado, his best days are clearly in the past. Unless one of those three players surprises us, AND David Wright or Carlos Beltran becomes a 50-HR power, the Mets can’t afford to have Pagan’s bat in place of Moises Alou.

Again, I’m rooting for Pagan, but for the Mets to compete, he will have to hit in excess of .330 — from both sides — to provide value in the vulnerable Mets lineup. Let’s take a look at the Alou-less lineup:

That lineup is going to have BIG problems if Delgado hits like he did last year — particularly because as Delgado goes, so goes Beltran. If Delgado doesn’t hit, Beltran gets poor pitches and expands his zone. Even if Beltran is unaffected, slots five through nine are not enough to strike fear in a pitcher’s heart. Alou’s presence is important both for his bat and what he can do to help the rest of the lineup. Even if Pagan hits .300 — which is unlikely — it’s not enough to help anyone around him.

Unfortunately, none of the rumored external players — Shannon Stewart, Reed Johnson, Juan Rivera, etc. — are any better than what the Mets have now (Pagan, Brady Clark, Endy Chavez). And unless the Mets can unearth someone in a blockbuster, they have to give Pagan the opportunity to fail — he’s earned the leftfield position until further notice. But Pagan is going to have to continue his superhuman performance to provide value to the Mets — his expected, eventual fall to earth won’t be enough in the long run.

Back Fifth Starter Insurance
Next What Spring Training Means