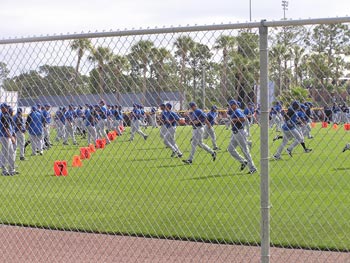 As of now, the New York Mets hold a 10-6 record in the Grapefruit League, trailing the first-place Marlins, Brewers, and Braves by a half game.

Should we be concerned that the Mets are behind the Marlins and Braves? Similarly, should we be thrilled that the Phillies are in last place with a 5-11 record?

Of course not — the spring training won-loss record means nothing. When games are decided in the latter innings by players named Robinson Cancel, Ezequiel Carrera, and John Hattig, it’s hard to take them seriously.

So what does spring training mean? If the teams aren’t going to try to win, what are they trying to do?

Years and years ago — as you may have heard from Keith Hernandez — spring training was a time for players to play themselves into shape. These days, most players come into camp already in shape, so the focus is on “shaking off the rust” by reacquainting themselves with the fundamentals. Teams spend much of their time doing skills-development and game-situation drills; “pitchers fielding practice” or “PFP” is a prime example.

The six or so weeks of spring training are used differently depending on the player. A veteran who has come into shape and no worries about his job may concentrate on improving a specific part of his game. For example, David Wright is working on his throwing, and Billy Wagner is tinkering with a changeup and a curveball. Minor leaguers, on the other hand, are given a chance to impress the Major League coaching staff with their tools and hustle. A youngster who catches the eye of Willie Randolph in March may receive a promotion in July.

Contrary to popular belief, spring training is rarely a test bed for deciding the starting lineup — at least, not with a contending team such as the 2008 Mets. A prime example came last spring, when Lastings Milledge tore up the Grapefruit League, Shawn Green looked ready for retirement, but Green “won” the rightfield job. In truth, it was predetermined — both Green and Moises Alou (who looked worse than Green last March) were going to be starters at the beginning of April, regardless of their ST stats. One need only look at the numbers of both veterans once the season started to understand — Green had a .949 OPS and Alou .895 OPS in the first month of the season, despite both hovering around the Mendoza Line all spring. In comparison, it doesn’t matter that Argenis Reyes is batting .545 or that Fernando Martinez is at .316 — both will begin and likely finish the season in the minors, despite their eye-popping stat lines.

Why don’t the stats matter? Mostly because they’re not reliable in determining a player’s value. Pitchers are not throwing their full arsenal of pitches, and/or are toying with unproven, inconsistent pitches. As mentioned earlier, Billy Wagner is throwing changeups and curveballs — so how valuable is it to a manager when a backup outfielder takes Billy’s hanging curveball over the fence? Not very. Similarly, in the first few weeks of spring, we saw Johan Santana and John Maine get lit up — not because they were pitching poorly, but because they were throwing mostly fastballs and working on their control; their true sharpness wasn’t there yet, and batters were able to “sit on” their straight balls. Additionally, after the fifth or sixth inning, most of the pitchers batters see are minor leaguers and fringe veterans fighting for a job — not the “best of the best”. Because of these factors, it’s hard to judge the value of inflated statistics, and managers rarely make a decision based on them.

However, spring training can be the difference-maker for a few bench players. This year, the Mets have few spots available on their 25-man roster — one or two at most. That’s why you see so much of Angel Pagan, Brady Clark, Anderson Hernandez, and most recently, Olmedo Saenz — these are the players fighting for the “25th spot” (Ruben Gotay was getting plenty of time, as well, before spraining his ankle). So far, Pagan is the leading candidate, and the injuries to Gotay and Alou mean that at least two of these players could make the final team. Pagan’s stats are the most obvious factor, but as we’ve discussed, not weighed heavily in the decision making process. More important to Pagan’s case is his all-out hustle this spring, the fact that he’s showing good bat speed from both sides of the plate, his defensive ability, and his baserunning. If the Mets took his .400 hitting seriously, they wouldn’t be actively seeking a trade for a big-hitting outfielder right now.

Similarly, there is a competition for a few bullpen spots, but again, the pitchers are not necessarily being judged on their ERAs. Steven Register is impressive because of the velocity, location, and movement of his fastball; Ricardo Rincon’s ability to change speeds and reach 91 MPH is more important to the coaching staff than his 0.00 ERA. Conversely, the Mets are not looking at Scott Schoeneweis’ sparkling 1.50 ERA so much as the fact his fastball is not getting past 85 MPH, and is straight as an arrow. Numbers lie in the spring, mostly because the sample is too small, so the manager has to be more of a scout — watching the player more than the stats.

Back Jumping On Berg’s Bandwagon
Next Psychic: Pelfrey is Number 5 Starter