Where Are They Now: Ron Hunt 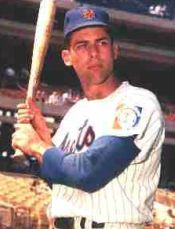 OK, I’m stealing the headline from Newsday … but we were doing it here first (weren’t we?).

For those who weren’t there, Ron Hunt broke into the bigs with the Mets in 1963, and was the first player to get a hit, score a run, and hit a homer at Shea Stadium. His claim to fame was the ability to get in the way of pitched balls — he holds the NL record for hit by pitches in a season with 50, and is fifth all-time in MLB with 243 in his career. That may not seem like such a big deal until you remember that wearing body armor was against the rules, and the helmets back then weren’t as impact-resistant as they are now — in fact they didn’t even have ear flaps. I won’t go into the rest of his stats and highlights because Amazin’ Avenue has already done a great job of that.

These days, Hunt gives lessons and runs baseball instruction programs in Missouri, and also offers to travel to you for instruction — see Ron Hunt Baseball for more information. I am certain that the former All-Star teaches skills beyond ducking into pitches.

In addition to helping kids with their baseball skills, Hunt returns to New York at least twice a year for fundraising events. Considering his history as a “Shea Original”, I’d hope that he’s part of a “goodbye to Shea” event this season — assuming one is held. Kind of strange we haven’t yet heard anything from the Mets’ PR department on that issue.