1. It looks as though the Mets are going to pass on Botts. Reason being they recently signed another power-hitting 1B/OF in Val Pascucci, whom I’m thinking was cut from the Phillies organization earlier this year. His 34 HR led the PCL last year while hitting a cool .284. He’s shaping out to be a career journeyman minor leaguer, but his stats look very similar to Botts’…with perhaps the two biggest differences being that Botts can switch hit, and age. I’m assuming this is going to be Omar’s fail-safe in case Delgado is still hitting .200 by Memorial Day.

2. Playing for AA Binghamton, top prospect Fernando Martinez has struck out a whopping 32 times in 114 ABs. Both of those stats lead the Eastern League. My question to you is: is this something to be concerned about? He’s on a pace to strike out 128 times in 456 ABs, a scary projection.

In regard to the first point, I’d have to agree — the Mets aren’t going to go after Jason Botts now that they’ve signed essentially the same player in Valentino Pascucci. Pascucci, like Botts, has recently put up impressive power numbers at the AAA level and is a first baseman. 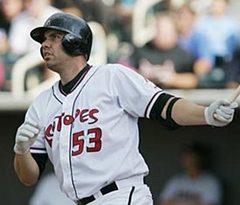 Also like Botts, the jury is out as to whether he can succeed at the MLB level or if he’s a career “quad A” or “AAAA” guy. While I’ve actually seen Botts play, I don’t know much about Pascucci other than what I’ve seen in his stat line and read in Baseball America, so I can’t comment. But he does appear to be something of a low-risk / high-reward type — not unlike last year’s pickup of Jake Gautreau.

Will Pascucci be the fallback if Delgado continues to struggle? I doubt it, unless he absolutely goes crazy with the bat down in New Orleans. The “Italian Bazooka” has never been considered a top prospect, and has only garnered attention recently because of his big year in the PCL (34 homers … ironically, eeking out former Mets farmhand Craig Brazell for the minor league lead) … so it’s not like he’s another Carlos Pena — a guy who was highly regarded, had some success at the big league level, then fell out of favor after a few down years. If Delgado is around the Mendoza Line on Memorial Day, I think the Mets will go outside the organization to replace him — my best guess being a guy like Kevin Millar, a veteran bat who won’t cost more than a few fringe prospects.

As for F-Mart’s struggles with making contact, no I’m not concerned in the least. He’s been a strikeout king since he joined the professional ranks, averaging one K for every five at-bats. He had a similar problem swinging and missing early last year in high-A ball, but by the end of the year had worked his way up to AA. Remember, this is a teenager we’re talking about — he’s only 19 years old and playing at a high level.

Let’s face it: Fernando Martinez is not, and never will be, a contact hitter. He’s projected to be a slugger, a major homerun threat, and guys like that do a lot of whiffing. I think he’s going to continue to strike out at a high rate for much of his first full season in AA, but also hope that by the second half, he learns to adjust. I haven’t seen him play yet but my guess is that there is a scouting report going around instructing pitchers to feed him plenty of breaking balls. If he sees enough of them — and it’s likely he’s seeing zero fastballs right now — eventually he’ll learn to recognize the spin and lay off.

Back More Non-moves
Next Comings and Goings