So Tim Marchman is calling for Willie Randolph’s head, and I disagree.

The gist of Marchman’s diatribe:

Unless a manager is a genius, all one can ask him to do is not actively harm his team’s chances. Randolph doesn’t pass this test. Under his leadership, the Mets failed to play up to the level of their talent in 2005, did so again last year, and are doing so once again this year. Correlation may not imply causation, and it may not be precisely the manager’s fault when his men are alternately listless, inattentive, and perplexed. When a manager is relentlessly inept at identifying his own best talent, though, and has over a period of several years proven himself completely incapable of seizing advantages during a game â€” when he’s displayed no feel for strategy or for tactics â€” he has to be able to inspire his men to play at their best, or better, if he’s to serve any purpose at all. 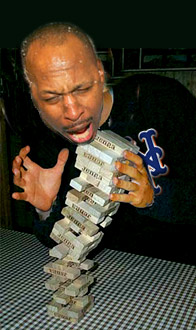 First off, the criticism of 2005 is way off base. The roster that year was far from awe-inspiring, and I think Willie may have helped the Mets overachieve that season. Remember he had a starting rotation that included Kaz Ishii, Victor Zambrano, and an underachieving Kris Benson, with Braden Looper “closing” ballgames. His starting lineup regularly featured Miguel Cairo, Victor Diaz, and Doug Mientkiewicz, Mike Piazza missed 50 games, and Carlos Beltran was a first-year bust. The fact they finished above .500 and tied for third place was a minor miracle.

Interesting, though, that Marchman completely glazes over 2006 — a season in which the Mets dominated with Willie at the helm. Did the Mets wrap up the NL East by August because they were that much talented than everyone else? Was Willie simply “lucky” that Chad Bradford, Pedro Feliciano, Aaron Heilman, and Duaner Sanchez were the best middle relievers in baseball, or is it possible that Willie knew what he was doing with those arms that year? Certainly, Willie should get some props for finishing so far out ahead when you consider that Pedro Martinez only made 23 starts (mostly mediocre ones that), and the aging Tom Glavine was the resident “ace”. If Willie was to blame for Beltran’s poor 2005, does he get credit for Beltran’s MVP-like 2006? If you’re going to blame Willie for the “listlessness” of certain players this season, mustn’t you also laud him for the inspired play of Jose Valentin, Paul LoDuca, Xavier Nady, Carlos Delgado, and Jose Reyes in that magical ’06 season?

Secondly, we all know Willie is not a genius tactician — few managers are. There are maybe a half-dozen managers in baseball whose brains and control of the game can directly affect the outcome of a contest — and even then, the experts suggest that means 8-10 ballgames a year. The short list of those geniuses are Tony LaRussa, Bobby Cox, and maybe Mike Scioscia. In addition to those three, there are a few managers who can impact any team based on a combination of their smarts and motivation — Lou Piniella, Jim Leyland, and perhaps Ozzie Guillen. Beyond those six men, I don’t know of many other managers who have a significant effect on their team — but if there is someone else, he probably is already employed.

Which brings me to my next point: if Willie is fired, with whom do you replace him? Anyone else would — over the course of the season — have about as much an effect on the team as Willie did: not much. Remember, Bobby Valentine is happily employed in the Pacific Rim, Wally Backman has been blackballed, and Billy Martin is dead. This is baseball, not football, and it’s very difficult for one individual to have a forceful, long-term impact as leader of a team. It’s not like you can hire Bill Parcells or Bill Belichik to turn the team around (though, I think Bill Cowher is available).

There might be something to the Mets’ issue of concentration and focus, but I’m not sure we can pin it on Willie. I would not be surprised if their occasionally lackluster play is due more to the elimination of amphetamines than Randolph’s motivational skills. Again, this isn’t football — it’s not like Willie can go into a tirade in the clubhouse, throw some chairs around, and scare the guys into playing harder. It might work for a little while, but eventually that act gets old. And what does Randolph have for motivational leverage? The starting eight are more or less set — so what can Willie do? Tell Carlos Delgado that if he doesn’t start hitting, Valentino Mascucci will take his place on the roster? Can he bench Jose Reyes for not hustling and put Damion Easley at short? Would he sit Carlos Beltran in favor of Endy Chavez? None of these are realistic, long-term threats, so although they might work for a game or two but the starters know they’d be back in the lineup eventually — Delgado knows the Mets won’t be sending his $16M salary to AAA. So even if the Mets had the ability to hire, say, Jim Leyland, what would he have in his pocket to “inspire” the team to victory?

Speaking of Leyland, his Tigers started the season 2-9, despite having the most talented team on the planet. Was it Leyland’s fault the team began so miserably? Is it to his credit that they’re on fire lately? Maybe, maybe not. Interestingly, part of theTigers’ early woes was due to their starting pitching. For example, hard-throwing righties Justin Verlander and Jeremy Bonderman had some tough outings. Dontrelle Willis was a mess. In addition, their bullpen blew some games and their defense was less than stellar — their third basemen have already made seven errors. An injury to one of their starting outfielders severely affected their offense. Any of this sound familiar? Oh, and the Tigers’ heating up coincided with that injured outfielder’s return to the lineup … funny how that works, isn’t it?

Bottom line is this: Willie Randolph may not be the perfect manager, but I don’t believe he negatively affects the team. Does he have room for improvement? Absolutely. Is it time to fire him, because the Mets aren’t playing up to expectations? I don’t think so. It’s early in the season, and though the Mets have had a few lackluster games, now is not the time to panic. Plus I’m not convinced they have the most talented team in the division — they might, but if they do, it’s not by wide margin. The Phillies and Braves have strong squads this year, and as of now the surprising Marlins are in first place. I don’t see anyone running away with the division anytime soon — rather, it is shaping up to be an exciting, wire-to-wire pennant race.

Back Comings and Goings
Next Mets Game 26: Win Over Diamondbacks