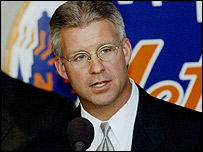 It was five years ago today that the New York Mets fired their GM Steve Phillips.

At the time, the Mets were in last place with a 29-35 record, 15 games behind the division-leading Braves. They had finished last the previous season as well, and had brought in Art Howe and signed several free agents in an effort to turn it around.

Quoted from the ESPN article at the time of the firing:

Wilpon said all the money he’s spent on the team doesn’t ensure success. “We’ve learned that painfully,” he said.

The Mets (28-35) got off to a bad start and never recovered, hurt by injuries and inconsistent play by their stars.

“This has been a very disappointing season,” Wilpon said. “We will attempt to energize the team … by getting younger and more athletic.”

I’m not suggesting anything here, just bringing it up. Ironic, though, isn’t it?

Back Mets Game 65: Loss to Diamondbacks
Next 10 Reasons the Mets Stink