Mets Get a Gamer 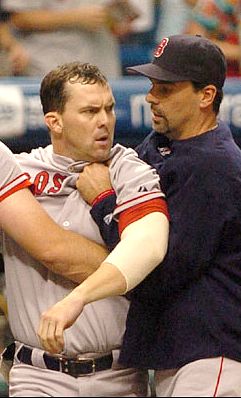 After Friday night’s game, Omar Minaya announced that the Mets acquired Trot Nixon, who had been playing for the Diamondbacks’ AAA Tucson team.

I’ll go on record as saying I LOVE this trade.

Yes, he’s 34 years old, his bat has slowed, and he’s been hobbled by leg injuries. I don’t expect him to come in and take over an outfield spot, and he won’t be anywhere near the player who hit .306 with 28 HRs back in 2003. However, he does have a fire in his belly, plays as hard as anyone in the game, and has a World Series ring. In short, he’s a winner — or as Omar Minaya “was told”, he’s a “gamer”.

“Everything that I’ve heard about the guy is that he’s a gamer,” general manager Omar Minaya said.

That word — “gamer” — was the first out of Pedro Martinez’s mouth, too. The two played together for seven years with the Red Sox, and won a World Series title in 2004.

“I’ll tell you what,” Martinez said. “He can play for my team any day.”

In addition, the emotionless sabermetricians should be OK with the move, as Nixon has a history of being a guy who can get on base. The Mets will be helped by another guy in the lineup who will see a lot of pitches and take his walks.

It’s too bad that Brady Clark’s season is over. I would have loved to have seen a Clark / Nixon platoon in right while Ryan Church recovered. They may not have been the most productive platoon on paper, but seeing their hard-nosed, all-out play on a daily basis would have been great for fans to watch, and possibly an inspiration to their teammates.

Did I mention I’m loving this move? For those who never saw Nixon play, he plays with passion and has a nasty temper — in the same mold as Paul O’Neill and Lou Piniella. Put another way, he’d fit right into a card game with Ray Knight and Robin Ventura — if necessary, he’ll start swinging to protect himself and his teammates. I realize this is the MLB and not the NHL, but I think it’s important to have one or two guys on the team willing to drop the gloves, so to speak.

He might last only two weeks, or he might just light a fire under this bunch. I’m hoping for the latter.

Back Mets Game 66: Win Over Rangers
Next Why I’m Rooting for Randolph