Why I’m Rooting for Randolph 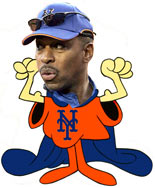 Think about it — why are you a Mets fan? Is it because you demand perfection? Because you expect your team to finish in first place and go deep into the postseason every year? Of course not — there’s already a local team with that attitude.

We are Mets fans because we hate the Yankees, and hate everything the Yankees stand for. For many, it’s killing us that the Mets have the highest payroll in the NL. While we may have been happy to have obtained Pedro Martinez and Carlos Beltran in the winter following 2004, the fact that they both received extraordinary contracts was a tough pill to swallow. As Mets fans we root for the underdog, and when our team is “supposed to” finish in first, it throws the concept of being a Mets fan out of whack.

For all of 2007 and the beginning of 2008, the Mets were not underdogs. As a result, we were transformed into Mets fans with the attitude and expectations of Yankees fans. Yuck.

For those who can remember back to graveyard era of Art Howe, the Mets were in a shambles. They had brought in high-priced players who were absolute busts. They were old, tired, lazy, and playing with diminished skills (sound familiar?). The bland and lifeless Howe was a symbol of the team. The Wilpons made several moves to right the ship. They fired their GM, fired Howe, and brought in the colorful and enigmatic Omar Minaya. Minaya, in turn, hired proven winner and local hero Willie Randolph. The process began over a year before, as evidenced by this quote from an article in the New York Times on June 13th 2003:

After Minaya hired Randolph, he had an interesting statement. This quote leads an article from November 5, 2004:

When Willie Randolph was out of earshot, and the initial excitement surrounding his introduction yesterday had died down somewhat, Omar Minaya made a telling admission.

“A lot of his success,” Minaya said, “will depend on the job I do. I’ve got to give him the right players.”

That last quote may be the most important, and could be part of the reason Willie is still manager of the Mets.

Going over these collected quotes, it sounded like the Wilpons were eager to reverse the plan of trying to fix the organization by throwing money at it. They gave the impression, in fact, that the Mets would build from within, using the Braves as a model to follow. One of the big reasons Willie Randolph was hired, in fact, was his reputation as a man who could influence and develop young players. After the 2004 season, the Mets were committed to building a team around Jose Reyes and David Wright — a team that would contend over the long haul.

Then, something went awry.

It started with the signing of Pedro Martinez to an unheard-of contract, and soon followed by the signing of Carlos Beltran to an even more obnoxious price. These were good moves in that they established that the Mets were serious about winning, and willing to put their money where their mouth was, but the spending should have stopped there. Instead, encouraged by their first winning record in four years, the Mets went for broke. That offseason, they spent more money and made more short-term moves to bring in high-priced veterans such as Paul LoDuca, Carlos Delgado, and Billy Wagner. The plans to build a strong organization for the long-term, to stock the 25-man roster with fruits from within, went out the window. It was akin to the strategy of the Florida Marlins one year prior, but the Mets failed in the execution. For one, they didn’t into the World Series, and second, they didn’t immediately swap away the aging veterans in return for young blood. Instead of following the strategy, and learning from history, the Wilpons went blindly down the same path of self-destruction.

I’ll reiterate one of the quotes from above:

Apparently, not painfully enough. The magic of 2006 numbed that pain, made it a distant memory. Time heals all wounds, right?

After “the collapse”, the front office was duped into believing the Mets’ roster constituted something better than a .500 team. The team’s .500 record from June to October was dismissed as an aberration. The demise of Carlos Delgado was deemed overblown. The fact that the Mets had gotten older and less athletic since that June 13, 2003 statement was never considered. So instead of admitting the obvious — that this team needed major renovations — it instead opted for more short-term band-aids. With the opening of Citi Field on the horizon, the Wilpons insisted on putting a winner on the field — and damn the future. Only months before, pundits talked about the starting outfield on opening day 2009 in the new ballpark. It would consist of some combination of Fernando Martinez, Carlos Gomez, and Lastings Milledge — symbolizing the young, athletic, built-for-the-longterm Mets. That pipe dream has been shattered, replaced by the same old, overpaid Mets. Rather than stick with a solid plan, the Wilpons chose to chase the Yankees, to throw good money after bad, and continue the illusion that the team is just one player away from the World Series. It’s kind of like owning a used car with 75,000 miles — do you replace the timing chain, knowing more repairs may be on the way, or do you bite the bullet and drive it down to the new car dealership?

When Willie Randolph came in, he was supposed to be the guy who would teach the youngsters how to win. Wright, Reyes, and Beltran were supposed to be playing with a mixture of players that included Milledge, Gomez, Mike Jacobs, Phil Humber, Brian Bannister, Aaron Heilman, John Maine. The few seasoned veterans on the team would be complimentary players — winners who could help Willie teach the kids. Guys in the twilight of their careers, like Cliff Floyd, would dot the roster, not comprise it. It was a fine plan, and Willie would have done very well executing it — remember, his strength is in developing young players, not babysitting old ones.

Randolph played and coached on many veteran teams, but was spoiled in that many of those older players were professionals. They had won before, and knew what went into success. They already knew how to carry themselves, on and off the field. Other than Moises Alou and Luis Castillo, the veterans handed to Willie in the past two years never tasted winning — and you can’t teach an old dog new tricks.

Thus, the Mets are a mediocre team, with little chance of making the postseason. As a result, Willie is the undeserved scapegoat. Many feel he has little chance of surviving the weekend as the Mets’ skipper. In order for him to succeed, he has to work with players he wasn’t supposed to have, with a team that is NOT “better than this”. The odds are stacked against him. In short, Willie Randolph is an underdog.

And that’s something we haven’t had at Shea in a long time.

Back Mets Get a Gamer
Next Mets Game 67: Loss to Rangers