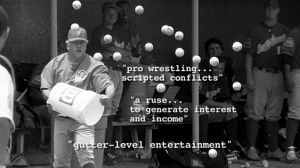 Be sure to tune in to SNY tonight at 6 pm to see the latest episode of “Playing for Peanuts“, in which you’ll see South Georgia Peanuts manner Wally Backman throw nearly two dozen bats on the field.

But don’t watch the show just to see the bats go flying. Rather, watch it to see what REALLY happened during that game — the events that led to the eruption, Wally’s actions, and the media firestorm that resulted.

If you remember the national media reaction to this particular game, it was highly dramatized and portrayed Backman as an out-of-control nutcase who suffered a “meltdown”. It was further MISREPORTED that Wally went running into the press box to start a fight with the opposing GM, the play-by-play announcer, and anyone else hanging around.

Well in this Sunday’s episode, you will get a rare chance to see what REALLY happened, and then compare it to the second-hand reports we received from the media. You will also be able to form your own opinion on Backman’s “meltdown”, rather than accepting someone else’s.

Back Valentin Packs It In
Next Mets Game 74: Win Over Rockies