No Word of Collapse 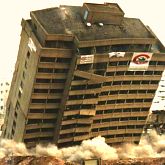 It was a monumental collapse … Jerry Manuel might have termed it a “catastrophic demise”.

Because a first-place baseball team blew a 7-and-ONE-HALF-GAME-LEAD in 26 days (I’m not counting the All-Star Break) to relinquish their lead of the NL East.

We’re talking here about the 2008 Philadelphia Phillies, who seemed poised to run away with the division less than a month ago.

OK, it wasn’t quite as devastating as the 7-game lead that the Mets dwindled away in the final 17 days of 2007, but it’s awfully close. Yet, no outlandish headlines from the Philadelphia tabloids. No calling for the manager’s head. Not one pundit across America called it a “collapse”.

I guess Philly does a better job of burying bad news.

The excitement of the Mets 10-game winning streak averted my attention from the Phillies’ collapse. However, now that the collapse has dawned on me, and seeing that it was a larger gap (7 1/2 games, rather than 7), I find it immensely gratifying to continue referring to “it” as a “collapse”.

Say it with me, folks:

Now doesn’t that feel better? Can we now finally get over that “other thing” that happened to the Mets last September?

I know I know, the Mets have already slid back into second place, one day after sharing the lead. But you know what? Maybe the Phillies would have done the same, if only it were a 163- or 164-game season last year.

Vince Lombardi once said that his Packers “never lost a football game — they just ran out of time”. Likewise, perhaps the Mets didn’t lose the NL East in 2007 — rather, they simply ran out of time.

Back Not a Ten
Next Mets Game 98: Loss to Reds