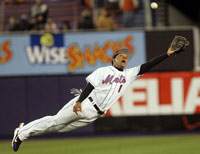 Brian Bannister made his Major League debut in front of a New York City crowd of just under 20,000, on a chilly 40-degree evening. From what we had heard and seen of him in spring training, the assumption was that Bannister was a control-type pitcher who would throw a lot of strikes. In fact, there have been some comparisons to the great Greg Maddux inasfar as his style goes.

The resulting performance was mixed. On the one hand, Bannister did not perform the way he is capable, probably due to butterflies and nerves. It wasn’t the largest crowd he’s ever played for, but it was his first Major League game, and it was in New York City. His command was nonexistent; he couldn’t find a consistent release point and was throwing his four pitches all over the place. However, he pitched nearly five innings before giving up a hit — a combination of not throwing enough strikes to allow a hit and Bannister’s gumption. More than anything else, this kid proved that he has guts and he is unflappable.

Many say that manager Willie Randolph should have pulled him before he gave up a 3-run homer to Nick Johnson in the 6th; many more say Randolph should have removed him immediately after the opposite-field blast. I disagree, and I laud Willie for leaving him in there. The kid is going to give up a lot of homeruns in his career, and he needs to know how to overcome them. And Willie needs to find out now, in the beginning of the season, if Bannister has what it takes to make it at this level; being humbled is all about a Major League pitcher’s life. So there on the mound Bannister stayed, obviously tired, without command, and having just given up a homerun to cut his 4-run lead to only one run. He had nothing, but he made it through and finished the inning.

It looked like it would have been a great story from there: rookie bounces back to finish the 6th, Sanchez and Heilman look lights-out in the bridge to the 9th, and Enter Sandman to finish the game, giving the rookie a win in his first Major League game in front of the NYC crowd that included his dad in the stands. However, a Ryan Zimmerman blast off of Billy Wagner to lead off the 9th killed the story; so much for the Sandman bringing us dreams.

In a way, it’s OK. Maybe it’s just another lesson for Brian Bannister: this is the Big Leagues, and mistakes can kill you. Maybe Bannister will look to his lack of command—whether it was due to nerves or the cold or whatever—and realize that it can’t happen again. After all, Billy Wagner only gave up one run; Bannister gave up the other three. If Bannister hadn’t hit Jose Guillen before Johnson’s homer, he might have won the game.

It would have been nice had Wagner pitched a flawless ninth, giving Bannister a win in his first game. But in Bannister’s heart he’d look back and think “you know, it wasn’t my best game, I didn’t really deserve to win it.” There’s no doubt that this kid has what it takes to win in NYC, and now that he’s gotten the first nervous game out of the way, he can move on to the next start and truly earn his first Big League win. It will be much more satisfying.

As for the rest of the team, the Mets looked pretty good. Wagner is only throwing about 92 MPH, which is why Zimmerman was able to rock him. It was a 3-2 pitch that Wagner got up in the zone; when Wagner is at 100%, that pitch is riding in at around 98-99 and blows it past the rookie. The homer doesn’t concern me. It’s early in the season, it’s cold, and Wagner is not yet Wagner. He missed significant time in spring training with the finger sheath issue, and is probably a few weeks away from his real self. By late May, he’ll be throwing BBs, and I’m fine with that.

There’s a lot of concern about Jorge Julio; the columnists and bloggers are already calling for his head. Once again, I disagree with the masses. True, he gave up a single and then a homer after getting Matt LeCroy to ground out. Well, Wagner gave up a homer just the inning before, but are we calling for his head? The, a batter reached base on a strikeout, because Julio’s ball ran about 4 feet. Yes, it’s a problem, but there is hope when you throw 95+ MPH with that kind of movement. If … and yes it’s a big if … Rick Peterson can teach Julio to harness that fastball, we’ve got a very dominating arm in pen — Brad Lidge-like dominating. True, this has been Julio’s problem all along, but he does have two things going for him: first, he did have success at one point, so he’s capable; and second, he has Peterson. In my opinion, Peterson’s ability is way overhyped. But, he’s a pair of new eyes. Sometimes, all a pitcher needs is a coach with a different perspective. Maybe Peterson will see something that other coaches did not. My fingers are crossed.

After the strikeout, the next batter bunted and LoDuca jumped on it quickly enough to peg the guy at second and initiate an inning-ending double play. Instead, Jose Reyes and Anderson Hernandez couldn’t decide who was going to cover and the ball flew into centerfield. The next batter was walked intentionally, then all hell broke loose. Julio threw a great pitch to Royce Clayton that broke his bat, but the ball trickled into CF. Schneider struck out, then Damian Jackson hit a double. It was just one of those innings where nothing goes right. It could happen to anyone. From what I understand, these innings happened to Julio all the time in Baltimore. But that’s the past, and I’m giving him the benefit of the doubt. I truly believe that if he can make an adjustment in his mechanics, and gain a little confidence, he could be downright nasty. Time will tell.

As far as the offense went, I was happy to see the Mets show some patience and better pitch selection, particularly Reyes and Beltran. Hopefully both players will continue to be patient and watch pitches, Reyes so he can get on base and Beltran so he can get better pitches to hit. On the other side, I’m concerned about AHern, who looks greatly overmatched. He may well save 30-40 runs with his defense, but if he can’t produce at least 80-90 on offense, then the Mets need to consider Jeff Keppinger or another option at 2B. It will be very difficult to succeed with two automatic outs in the lineup.