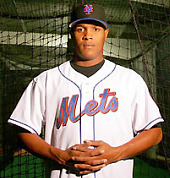 I can remember a time when Anderson Hernandez seemed to be as good a defensive shortstop as Jose Reyes — and therefore was an ideal backup in the event Reyes was ever injured. However, either my eyes lied to me or A-Hern regressed, because he’s something of a liability at the position. His strong arm and wide range are neutralized by an inability to make the routine play and frequent mental errors. Those issues are probably due to the fact he’s been playing fairly frequently at second base for the past two years — where he appears to be more comfortable.

There’s no argument regarding AHern’s raw skills. He has quick feet and good range to his right and left; soft hands; good fundamentals in fielding the baseball; smooth pivot and nimble feet when starting or turning the DP; quick release and above-average arm strength. When he’s focused, he’s an elite fielder.

Offensively, Hernandez has improved since we last saw him in Flushing. He now can drive the ball into the gaps and to the outfield wall, and looks both more comfortable and more confident at the plate. Previously, he was an automatic out. Right now I would say he hits like Luis Castillo, with less contact and minus the walks. If you could somehow combine AHern’s glove with Castillo’s offense, you’d have an acceptable solution at second base.

As it is, Anderson Hernandez has not progressed enough in the past three years. At 27 years old, he’s entering his peak and isn’t likely to improve much beyond what we saw this past season. If this were 1975, AHern would easily find a job at second base somewhere in MLB because of his glove. But the days of Doug Flynn and Mario Mendoza are long gone, so Anderson Hernandez projects as a backup middle infielder. Considering the fact he makes the MLB minimum salary, can switch-hit, can drop a bunt, has above-average speed, and can ably field both sides of the keystone, AHern is a nice fit as a 24th or 25th man on a strong offensive team. Certainly, I’d prefer Hernandez and his $400K salary to Alex Cora — since Cora costs five times as much and brings less to the table. Plus, you have the flexibility of stashing AHern in AAA until needed — especially if you need your utility man to have some punch / serve in a pinch-hitting role.

So should Anderson Hernandez return to the Mets in 2010? I say yes — on a minor-league contract, and starting the season in Buffalo.

Back 2009 Analysis: Nick Evans
Next Can Craig Hansen Get the Monkey Off His Back?