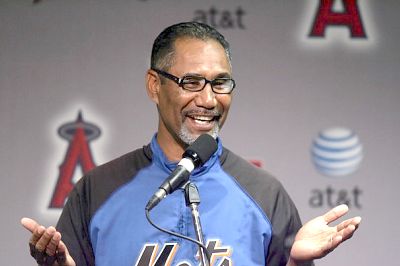 Perhaps Jerry Manuel is smarter than we think … or could he be making a grand mistake?

Reports from Flushing say that Manuel has yet to accept a two-year, $2M contract offer from the New York Mets. Maybe he simply hasn’t checked his mail in a while … or perhaps the mailman put the offer in his neighbor’s box by mistake.

Or maybe Jerry knows he has the Mets in a difficult negotiating position.

After all, it was the Wilpon-owned SNY broadcast booth that gushed over every one of Manuel’s moves, aligning millions of fans with the idea that Jerry was some kind of tactical genius. If you listened enough to Keith Hernandez, you might have thought Manuel invented the hit and run. I think Gary Cohen once applauded Manuel’s grace in handing over the lineup card prior to the first pitch of a game.

Manuel’s “magic” pervaded in the media as well, as writers hung on every sound bite from him, and crafted stories about this managerial messiah. Despite the Mets’ second late-season collapse in as many years, the media absolved Manuel of any responsibility. Remarkable, to be in such a position of getting all the credit when things are going well, but none of the blame when things go bad. Yet Jerry Manuel pulled it off.

In fact, one journalist was so impressed with Manuel’s ability she wrote this:

Having Manuel in charge for a full season is one area in which the Mets could expect to improve their won-lost record without making the enormous financial outlay it could cost to fill their other pressing needs.

And to top it off, the article is titled “Mets Can’t Afford Not to Bring Back Manuel”

Now if you’re Jerry Manuel reading articles like this in the tabloids, and seeing the results of fan polls supporting you on MetsBlog, and hearing Mets stars such as Carlos Beltran, Carlos Delgado, and David Wright sing your praises, would you be quick to accept the Mets’ first offer? Heck no … make ’em sweat a bit. Tell them you want DOUBLE that.

Funny how the tables turn.

The Mets’ front office have created quite a situation for themselves. They patted Jerry on the back all season, encouraged the idea that he saved the franchise, and now have to put their money where their mouth is. (Or where Jerry’s mouth is, you be the judge.) The Mets — who are extremely conscious of their public image and often make decisions based more on popularity than logic — would be facing a mutiny if they did anything other than cave in to Jerry’s demands, and make sure he’s locked up for the opening of Citi Field.

And what if Jerry makes the Mets wait until after the results of the voting for Manager of the Year are published? And what if he wins, as so many NY writers have suggested? What kind of leverage do the Mets have then? They’d look really foolish if they didn’t have the “smarts” to bring back the Manager of the Year … and the Mets don’t like to look foolish.

On the other hand, does Manuel have any place else to go? Does anyone outside of New York truly believe that Jerry Manuel can manage his way out of a paper bag? Or does it even matter? The Mets are in a situation where it doesn’t matter whether there’s someone else bidding for Jerry’s services — if they’re concerned about public opinion, they’ll have to bid against themselves.

This situation will be fun to watch play out.

Back Which Way Should the Mets Go?
Next Option(s) on Carlos Delgado