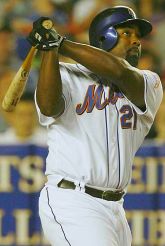 Some sources have reported that the Mets picked up their option on Carlos Delgado. However, the generally reliable Associated Press is not among those sources, and there has been no official word from the Mets. What we have is this quote from Brand Manager Omar Minaya:

Of course, the Mets would be silly not to pick up the option — one look at the potential free agent market for first basemen tells you that one year of Delgado at $12M is a bargain. This winter, Mark Teixeira will presumably command an insanely overpriced contract that could reach 7-year, $100M+ proportions. After Teixeira, the next-best first sackers on the market are Jason Giambi, Rich Aurilia, Kevin Millar, Eric Hinske, and Sean Casey. Further, there aren’t too many slugging first basemen expected to be available via trade this winter. Which brings up an interesting idea …

Do the Mets sign Delgado, and then flip him to fill another need?

It all depends on whether the Mets think Delgado has another banner year in him, and whether they think Nick Evans, Dan Murphy, Mike Carp, or a combination of them, can take over the position in 2009.

But then, it’s also possible that a Delgado trade, or another deal, can both address a hole AND net a potential first baseman. I’m thinking along the lines of a Chad Tracy or Garrett Atkins.

Why consider trading Delgado at all? Because his value may be higher now than it will ever be again, and it might be high enough to bring back a sorely needed young starting pitcher or reliever / potential closer. There are a few teams out there who desperately need a slugger for 2009 — the Diamondbacks, for example. Possibly the Giants, the Mariners, or the Blue Jays. Perhaps a team that loses the bidding for Teixeira — i.e., the Angels.

I was of the opinion that Delgado was the main key to the Mets’ success in 2008, and I stand by that — he WAS the single biggest reason the Mets finished as high as second place. But I’m wary of counting on him to carry the team again in 2009. It might be more intelligent to use him as a chip to bring back reinforcements, and find another way to replace his offensive production.