Second Base Timing – Catch 2B2 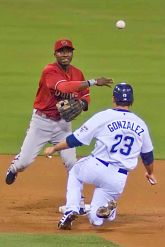 Listening to some Mets fans, you’d think Orlando Hudson signed up with the orange and blue two weeks ago. People are already bickering about his best spot in the lineup, and whether Daniel Murphy should continue his second base training in the Arizona Fall League. It’s not unlike the hordes of Yankees fans who already penciled in C.C. Sabathia to the Bronx Bombers’ starting rotation. Unfortunately, the free agent process has yet to begin.

First things first: yes I’d love to see Orlando Hudson as a Met in 2009, and do believe it’s a possibility. However, it’s not a foregone conclusion, and there is a sticky matter to contend with first … or maybe, it’s second.

The issue, of course, is Luis Castillo, who remains on the roster and has three expensive years left on his contract. It’s easy to say “let’s dump him for Eric Byrnes and sign Hudson”, but the reality is more complex. Further, the timing will be tricky.

For example, if you trade Castillo first, that opens up a hole on the roster, and puts the Mets in a poor leveraging position when it comes to free agents such as Hudson — and David Eckstein. Knowing that the Mets don’t have a second baseman for ’09 means their price for one goes up considerably. Sorry, Argenis Reyes will not strike fear into the hearts of savvy agents, and the Dan Murphy experiment is a longshot at best. True, Castillo had a terrible 2008, but he still holds some level of respect outside of Flushing, and as long as he’s around, the Mets don’t NEED a second baseman (except in the opinion of 99.9% Mets fans).

Don’t believe it? Consider last winter, when the Mets had NO CATCHER on their 40-man roster, and very nearly signed Yorvit Torrealba to a contract that would make Castillo’s look like a bargain. Torrealba doesn’t get three years and $15M if the Mets have anyone with a shred of experience and potential in the organization.

Now imagine if Castillo is traded, Murphy is a bust at 2B in the AFL, and Hudson DOESN’T sign — what then? Then, the Mets are really in dire straits, and could be forced into giving someone like Jamey Carroll or Felipe Lopez a Torrealba-like deal. Or they bring in a banged-up, overaged player like Jose Vidro (an Omar Minaya favorite) or Ray Durham (a Jerry Manuel favorite).

So it might behoove the Mets to hold on to Castillo until another second baseman. But then, it will be apparent to everyone in MLB that Castillo is on the block, and it could be impossible to deal him without swallowing most or all of his contract (yes, it IS possible for Castillo to be more difficult to trade than he is right now). If the Mets do indeed sign Orlando Hudson, and have Castillo still hanging around, opposing GMs will laugh heartily at any and all offers Minaya puts on the table.

I’m not sure which way works best — and not convinced a move of Castillo will be made at all. If he is still on the team come spring training, I won’t be surprised to see either of the aforementioned Vidro or Durham also brought in as motivation. Vidro can play some first base, and Durham is better suited to left field at this point of his career, so either would fit in nicely even if they don’t win the starting second base job.

Should be interesting to see how this turns out.

Back Aaron Heilman: Most Abused Pitcher in Baseball?
Next Ambiorix Who?