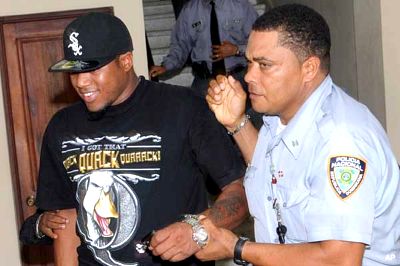 From the above picture, it’s clear that Ambiorix Burgos is NOT a member of the New York Mets but the Chicago White Sox. Whew! that was a close one … the Wilpons should be relieved that Burgos was traded to the Palehose prior to his running and killing two innocent women in his Hummer. What a public relations nightmare THAT would have been!

Oh wait … Ambiorix Burgos is still listed on the Mets’ 40-man roster. Huh. Guess Jay Horwitz has some damage control after all.

So from this picture I see one incredibly disturbing, and three baffling things, in that order:

1. Burgos is smiling. To get caught on camera smiling when you’re being arrested for the murder of two innocent people is NOT good.

2. Why is he wearing a White Sox cap? (Though, thanks for distancing yourself from the Mets, Amby!)

3. Can the Mets give Ramon Castro a raise so he doesn’t have to work as a cop in the offseason?

4. Who is the midget grabbing Amby’s right elbow?