Supposedly there is still baseball being played this month — in Philadelphia no less! Can anyone confirm the rumor? Hard to believe anyone in the Northeast would be attempting to play ball in this cold, wet, windy weather. 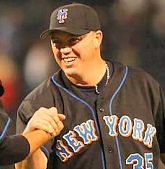 Anyway … with the typhoon-like conditions and snowfall sweeping through our area, I can’t help but pay attention to the weather. And then think about the weather. And somehow the name David Weathers comes into my mind.

I saw on MLB Trade Rumors that David Weathers might be available. Yeah, he’s 39, but he might be able to give some counsel to some of the other members of the pen, a la Roberto Hernandez to Aaron Heilman in ’06. A year at, say, $3 mil, with a $3.5 mil option . . . ? Is my brain suffering from some sort of pre-freeze by thinking about getting Weathers again?

Tell you what, either I’m also suffering from pre-freeze, or I agree that Weathers would be a welcome addition to the bullpen. Before the naysayers start screaming “no! he’s old and fat and ugly and he stinks!”, please read on for some reasons this could make sense.

First, we’re not suggesting that Weathers is the end-all, be-all, fixitup solution for the bullpen. It’s a START toward improving the ‘pen. By no means should we believe that bringing in Weathers will be a lights-out setup guy, nor that he is the answer to fill the vacant closer role.

But, now that we’ve mentioned it, there’s one reason to bring him in. Weathers does have closing experience, and was pretty decent in that role. Not great, but decent. Again, not suggesting he should be brought in to close, only suggesting that it can help to have him around as a backup plan. As recently as 2007, he saved 33 games and blew 6.

Further, I like where “sk” is going with the counseling aspect. For the past few years, Billy Wagner was the de facto leader of the bullpen. He won’t be around, and despite what fans may think of his public persona, bottom line is that other relievers went to him for advice and looked to him for leadership. That leadership needs to be replaced, and the tough, cool, no-nonsense, and well-experienced Weathers would be an ideal replacement. In his last tour of duty with the Mets, Weathers had a positive effect in the development of Dan Wheeler. He could be a calming influence and mental guide for youngsters such as Eddie Kunz. His knowledge and preparation would be an asset particularly if the Mets decide to find a closer from within.

In addition, there’s the fact that Weathers can still pitch. As mentioned, he saved 33 games in 2007, and last year he posted a 3.25 ERA, with 19 holds, in 72 games. He has a rubber arm, he and experience pitching in every situation — mopup, setup, closing, you name it. We know he’s not going to panic, and we know he can handle New York. We also know he has some chutzpah, something this club can use a bit more of. He won’t blow anyone away, and he’ll give up hits, but he will throw plenty of strikes — and isn’t that something that was a big issue from Mets relievers last year?

Finally, Weathers should come cheaply. Last year he made $2.75M, and I doubt he’d require a huge raise over that. Perhaps he’ll hold out for a two-year deal, but who will offer that to a 39-year-old righty?

If the Mets can bring him in on a cheap, one-year contract, I say do it — but don’t stop there, make it a first step.

Count me in as a “Weathers man”.