How Glavine is Screwing the Mets 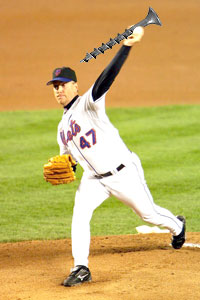 This hemming and hawing from Tom Glavine has nothing AT ALL to do with indecision, nor family issues, nor any other “personal matters” being spouted in the press. It is a ploy and manipulation by the Braves and Glavine, who are working in cohoots to deny the Mets draft choice compensation.

Today is November 30th. That may mean nothing to you unless you read the new collective bargaining agreement, which (among other things) moved the last day to offer arbitration to December 1st.

Now you know why the Atlanta Braves have not yet offered Tom Glavine a contract … not “officially” anyway. By doing so, and Glavine signing before December 1st, means that the Braves would have to surrender a first-round draft pick, and would also give the Mets a second sandwich pick — because Glavine is one of the nine “Type A” free agents.

That stated, we now understand completely why there has been “indecision” — the Braves would be crazy to sign Glavine before finding out if the Mets will offer arbitration. For all we know, Glavine and the Braves have already agreed to a contract, and are just keeping it hush-hush until after Dec.1. It IS strange that some sources report that the Braves have made an offer, while others say the Braves have yet to make an offer.

Yes, there is a chance that the Mets will offer arbitration to Glavine, to protect themselves, but how do we know there isn’t another “gentlemen’s agreement” between Glavine and the Wilpons?

Don’t bother waiting to hear news from Glavine today, nor tomorrow. Instead, hope that the Mets offer arbitration before 11:59 PM tomorrow. I have a really funny feeling that Glavine’s feelings about his 2007 team will miraculously crystallize on December 2nd or 3rd.